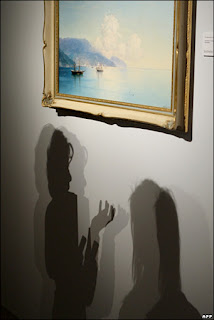 Mr. Janak was admitted yesterday to the JSK centre for palliative care.

Our basic philosophy of palliation is that as much as possible a person should spend the last days of their lives at home. End-of-life care means many things. It means being in as much comfort as possible. Surrounded by family and friends. Having assurance of their passage from this life to the greater one that awaits. Being loved and cared for. Working through any unprocessed issues - appreciating and being appreciated.

The brutal grimness of many people's lives does not quite fit the above picture. But that doesn't mean that we haven't seen many of our HIV positive friends spend their last days in peace, even as they came up to - and then walked through death's door.

Mr. Janak situation is so extreme that we just had to admit him ourselves.

We met Mr. Janak and his wife 3 years ago. Both have HIV - and multiple other overlapping and confounding issues. The long and short of it is that she has suffered from a stroke - due to a brain infection - which has left her paralysed on one side. He has been in and out of alcohol - and was severely beaten up in his drunken brawls in the past. As his immunity has decreased Mr. Janak has fallen ever more frequently ill. Tuberculosis has been the main foe - and despite getting him onto treatment repeatedly - which has meant repeated advocacy on his behalf with local health authorities - he has also repeatedly defaulted on his drugs. All the hours our staff spent with him - encouraging, educating, just being - seem largely washed away by the bottle.

For the last few days things have spiralled totally out of control for Mr. Janak. He has been at home - semi-comatose and incontinent. He seems paralyzed from below the waist. His semi-paralyzed wife is unable to clean him and he has multiple bed-sores. The other family members have long since given up on care for him - leaving a scared and sad mother as his only hope.

We tried getting him into a hospice. No beds available. We took a deep breath and admitted him here.

Mr. Janak was sleeping this morning when I saw him. He was under a white sheet. What he was dreaming about I do not know. We prayed for him last night, and he was looked after all night by our nurse.

This may be Mr. Janak's last day on earth. At least he is in a clean place where people care for him.

There are many 'what ifs' in Mr. Janak's life. The time to act on those is past. Many things were tried - and for various reasons they did not turn out the way we hoped they would.

But now we have a work of care to do.
Posted by Andi and Sheba Eicher at 11:15