What manner of love is this... 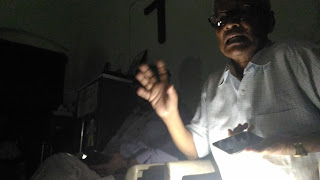 We were gathered in the room of one of our staff nurses.  Some sat on the 3 chairs available.  Others on the diwan.  Some on the floor.  Others in the next room.  It was our Thursday night cottage Bible study.

Dr. Sunny Philip, translated by Rev Emmanuel, took us through the story of the young Jewish servant girl, who was kidnapped by Aramean raiders.  She then ends up serving as a slave girl of whom? The wife of the very commander of the raiding parties - the Aramean general Namaan.

Dr. Sunny asked those of us gathered in the room to take turns telling the story of this girl, speaking in the first person as if we were the girl herself, each person adding a sentence.

We walked through the experience of abduction.  Many said that they prayed a lot - but the fact was that whatever prayers took place, the girl was torn away from her home - and most likely at least some of her family were killed.  And then she found herself in a far off place as a slave.

'What do you think the girl felt? What was going through her mind?'

Most of us responded that she was angry.  Afraid.  Hurt.  Confused.  Scared.  Scarred.  Angry.  Bitter. Wondering why God had not heard her prayers.  Perhaps wanting to take revenge.

As the servant girl of the commander of the raiders, wouldn't it be natural for her to want to poison his food as revenge for the ravages that he and his soldiers had brought about on her family, on her homeland?

And then what happens.... One fine day, she finds out that her master has an incurable disease! Leprosy.  That scourge of the ancient world.  No hope of any therapy.

Wouldn't it be natural for the girl to rejoice?  To thank God from her heart that justice was being done, and that he who had caused such damage to her home, was now being punished with this disease?  I think if I were that girl, those would have been my thoughts.

And yet instead of revenge this girl seeks the best for her master.  She tells Namaan's wife that if her husband would go to Elisha in Israel, he would be cured.  Amazing.  Way, way out in left-field kind of love.

This is not some sick 'Stockholm syndrome' - but a genuine love.  And this girls words are backed up by such a powerful life that the general Namaan goes to his king and asks for the unthinkable: to go back to the place which had been plundered and meet a seer who would heal him. And that too when a quick due diligence would easy show that Elisha had healed a total of zero people who had suffered from leprosy so far (and would not do it again it seems...).

Do we love this way? Counter-current.  Completely topsy-turvey?  The world shakes ever so slightly when someone does.

Two millenia ago, a young man, into whose wrists and ankles were cruel nails were being hammered cried out to His heavenly Father:  "Father forgive them, for they do not know what they are doing."

Are any of His followers willing to put this costly love into action today?

One of the participants of the Bible study spoke up at the end.   He was visiting our HBM hospital from Jharkhand for a training we were conducting.  This man shared how with the recent "anti conversion law" being passed in Jharkhand, he had so much anger and hatred against those who pushed this legislation through, denying so many true freedom of religion.  And yet, hearing about the slave girl, and her love for her mistress and master, the man said that he knew that God had called him here to Lalitpur to hear this message. And to see the ugliness of his hatred.  And to forgive.

And then another of our guests spoke up.  A young man working in a remote tribal community.  He talked about how when we had imagined the girl's home going up in flames, that he remembered his own home being burned.  He was a tribal Christian from the Khandamal district of Odisha state.   Some years ago a local pogrom launched against Christians by various Hindutva outfits left numerous homes burned and a number killed as well.  He and his family had fled to the forest and lived there in fear for some days.

His family eventually got shelter in a refugee camp for some time and later he got a job in another state.  Later his family moved back to the ruins of their home.

And then we heard something that took our breath away.  The man talked about how after some time, the local leader who had initiated and promoted the violence against the Christians - this leader's son got leukemia.  Instead of rejoicing that the mob-leader was getting his 'punishment from God' - this man's father went and reached out to the family and helped take care of the dying boy.

Others in the local surviving Christian community criticized the father - saying that he should have nothing to do with such a wicked man.  But the father persisted in showing love to the man who had burned his house and seen people killed - by caring for the dying boy.  The local leaders heart was also changed by these acts of loving-kindness by the people he had instigated others to drive away.

My eyes were moist in tears as I heard the simple man tell this amazing story.

Found in small places.  Where a great God lives.

A wounded healer who call us to follow Him.
Posted by Andi and Sheba Eicher at 11:01 No comments: