Stepping out into the dark night 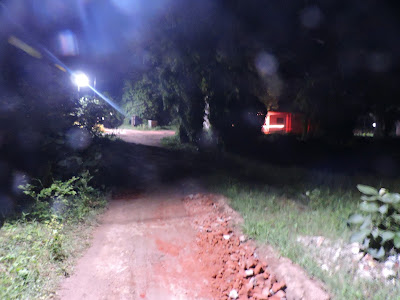 Our HBM Hospital is smack opposite the government district hospital.

At times, when I seen the free govt. ambulances drive into the gates of that hospital I wish that some more of those patients would get help from our healing centre.

For the last 3 days, that has happened.

There is some kind of strike going on in the govt. hospital.  No small children are being admitted.  We have a steady stream of very, very sick babies coming to us.  Our modest nursery is full.  Over-flowing.   The extra ward which we have been allowing a local paediatrician to use is also full.

Today we had the sad experience of seeing two of these young lives slip away under our care.

It would have been so easy to just tell the attendants right at the beginning to go to Jhansi.  100 kms away.  Big hospital there. All the facilities.  Except that we know that 3/4 of the families will just not go and the babies will die at home.

So we have been caring for them.  Well beyond our comfort zone.  And with the sadness of seeing these tiny bodies stop breathing.

Sheba was on call this evening.   Amma and Appa and Enoch and myself went off the hospital campus to a Bible study at our palliative care staff member Amit's home.   The hospital jeep, carrying a good 25 folks joined us.  The room was packed.

Meanwhile, Sheba was on call at HBM.   As usually she went and did her evening rounds.  And then things happened.  A child who had been admitted by the paediatrician and who was under his care died in the ward he is using for his patients.

A mob collected.  30 - 40 people barged into the hospital.  Chairs were broken in the melee.

Our cool-headed Medical Superintendent Dr. Tony came out to talk with them.   An hour was spent in confrontation.  Tony is an amazing man.

And then another group formed.  This one about one of the previous kids who had expired.  Tony talked with them too.

And then another group came.  They had been at the govt. hospital with a sick child.  They wanted to admit the child at our hospital.  We are full.  We are reeling with two mobs already this evening.

The group that was refused admission for their child was enraged.  More shouting.  Some threats. And then somehow that mob was also dissipated.

Unsurprisingly, Sheba is flat out in bed right now.  The quietness of the Lalitpur night may yet call her back to the hospital, given so many sick kids who are admitted.   I have said some quiet prayers on her behalf - and on behalf of the families who have brought their sick ones to us for healing.  We may have been their second choice given the strike at the govt. hospital - but we wish that their loved ones will be touched.  And that we as a hospital will keep growing to be the first choice.  A place where people know that we care and love and treat in the name of spirit of our Lord Jesus Christ.   We are locally known as 'Isahi Mission Hospital' - and would like to live up to our local name.

So spare a thought for the young doctor of today's India.

Why would anyone want to meet a mob.  And not one, but three in the same evening?

It is no wonder that mission hospitals - real ones - that are really in places that need medical care - are finding it harder and harder to attract and retain doctors.   Why would a young medical grad want to come here - when a plush corporate hospital awaits in a big city?   And given that most young medical grads (in India at least) are not really making their own choices, but rather making Mummy and Daddy happy - why would any parent want their young adult to spend 'the best years of their life' (and the crucial years of getting into higher studies) in a 'God-forsaken' place?

The days of the missionary doctor setting up a small clinic under a tree and having scores of happy villagers line up for his (or her) wonder-drugs are long, long, long gone.

The days of the mob are here.  And are here to stay it seems.

Almost 20 years ago, when working at the Nav Jivan Hospital in Jharkhand we saw how deeply entrenched the law of the mob was.

A lady had died.  The mob collected.  Glass was broken.   A fresh specialist doctor from Vellore was on call.  Her face was very close to where the glass splinters were flying.  The hospital filed a case in the police station.  The perpetrators came and asked the hospital to remove the case.  We asked them to give us a written apology for the damage done.  They refused.  And filed a case in the consumer courts that wound on for years before it was finally closed in our favour.  The lady doctor in question had to travel back to the hospital a number of times.   Unsurprisingly, she and her specialist doctor husband are not serving long-term in one of our hospitals.

And then this.   Nav Jivan was (and is) in a hot-bed of Naxalite (or 'Left-Wing Extremists' if you prefer) activity.  One fine day our administrator and medical superintendent are called 'into the jungle' to meet a commander.

When you get that kind of a call, you go.  They went.  There they met the folks from the underground who were holding court.  And who should be with them, but a well-known trouble-maker who had set up shop (literally) just outside the hospital gate.

The reason our good folks were called to meet the men with the guns?  Well, it seems that our 'outside-the-gate-man' had some issues to accuse the hospital of.  "you do not have a paediatrician!  You need to get a gynaecologist.  You need better equipment in your lab."  and on and on.

Our medical superintendent and head of the hospital was a tough-talking Odiya doctor.  He took the bull by the horns.  Pointing at Mr.-know-it-all, he asked him point-blank about who had looked after his father and nursed him back to health from certain death.

The Naxalite leaders soon realised that they had been led along by a man talking through his hat.  They ended the meeting soon and sent our friends back to our hospital and we did not hear from them about this issue at least.

But the absurdity of it.  Being called into the jungle and told in the presence of men-with-guns that we should improve our staffing and get 'better doctors.'

So there you have it.  Voices and experiences from 2 decades ago.  With our dear country showing not an inch of improvement.  If anything, we see more and more mobs taking over and forcing things.  Put the word 'mob' into the search feature of this blog and you will find that over the past few years I have written about the actions of angry masses a fair bit.

Today we got the news that in Bangalore more busses were burned because people are angry that the supreme court made a judgement on how the water of the river Cauvery should be shared between the states of Tamil Nadu and Karnataka.  What took my breath away was that the Karnataka govt. gave Rs. 10 lakhs to the families of those who died when the police opened fire on a rampaging mob.  The deaths were tragic, but these were people who were breaking things up and could have killed people in their anger and refused to stop when the police fired in the air.   To give them a 'reward' seems absurd...

And so we continue to live in the midst of love and leaves and the at times aching paradox of broken humanity.

We are only here because we are called.  Called to see if others would like to taste and see that the Lord is good.  Called to welcome and model a life of Christ-following, strengthened by His very presence, humbly living out a life of (hopefully) joy-driven service in the midst of the sometimes ugly face of a world which is upside down.

Its 11.55 PM.  Sheba has been woken for a call.  She has just stepped out of the home into the dark night to go to the hospital.

I say a small prayer of hope.
Posted by Andi and Sheba Eicher at 23:59 2 comments: 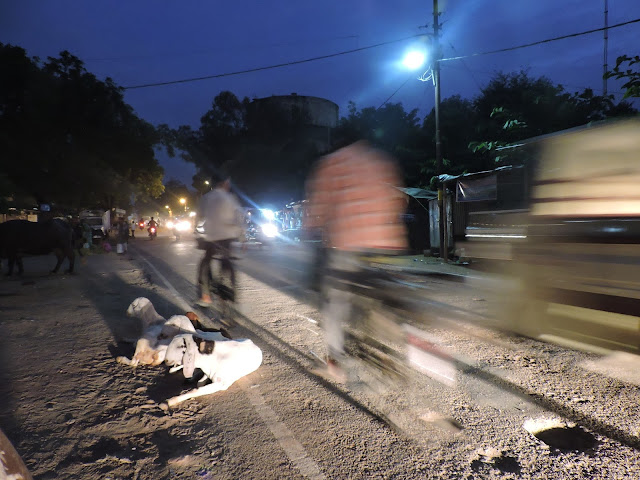 The last few months have been very much about Dad and his final days.   Its been a month now since he died.  Translated to glory.  The chariot of fire came and whisked him away.  Quietly.

There is much still to write.  A whole life-time.  I was up in Mussoorie last weekend and just peeped into a few of Dad's many files in his office.  A whole set of life-times.

But I have intentionally not written for the last two weeks.  And will probably not write about Dad for some more time.

Just to sort things out a bit in my own head.  In my own heart.  To go back to the rhythm of life.  To discover the new normal.

I need to pray more and talk less.  To be quiet in the presence of the Lord.  To sing more and walk in the morning coolness.

The German word is spelled the same way.  Pronounced 'Pow-seh'.  It means 'recess.'

Some days ago my sister Premila posted on social media that she was stepping away for a while.

I have done the same - and want to extend the time of quiet for some more - at least on the many-faceted Dad-shaped hole in my heart.
Posted by Andi and Sheba Eicher at 22:25 No comments: