We have switched worlds.

One day we were in our own familiar zone of the strange that seems ordinary to us.  Like a mobile vegetable market barely 300 meters from the most prestigious medical college and hospital in India:


And barely 24 hours later, we are in the land of the Germans - wending our way along the Neckar river and seeing quaint, lego-like villages, each with their own ancient church, its august spire pointing to the skies...

And how do we get from point A - aam aadmi ka India to point B - Bessigheim und die Umgebenung?

Well, for one with a huge amount of grace and an amazing set of blessings showered upon us.

Over the last year we have been dreaming of a Germany trip with Mum.  This winter was the window of opportunity as the kids have finished their 9th and 11th standard in school.  Enoch and Asha's next winter will be the prelude to their external exams for 10th and 12th respectively.   And Mum turned 80 this year. 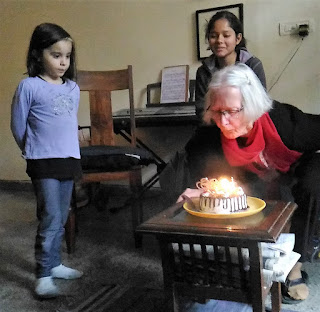 It has always been a desire for us to meet our German relatives.

We had a small surprise Birthday party for her with Stefan, Neeru, Ashish, Anjali and Anita on our way out to the airport.

Oma had a cake with 8 candles on it.  One for every decade of her event-filled life.

And so with a huff and a puff she blew out all the candles...  only to see them sputter to life again.  As a good trooper she blew them all out again... and of course most of them relit to the joy of all the lil' and big 'uns in the room.

What a life this amazing lady has led - and how proud we are that she is our mother and Oma to many! 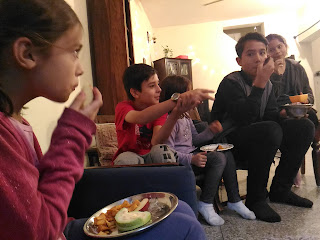 We had been planning this trip since March this year, but there were many a slip between cup and lip and several times it seems highly unlikely that we would be able to get on a jet plane and fly away.

Money was one of them.  But God provided.  As He always does - and as far as Eicher experience has been - almost always in the 11th hour.  Visa problems loomed large. And so on and so forth.  Even when we took the big, big breath and bought our flight tickets (temporary advance provided by a near and dear one) it still seemed to be science fiction. 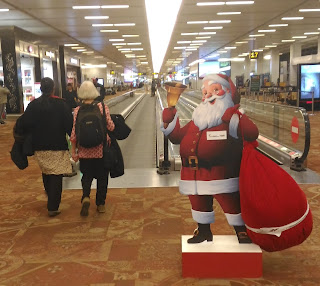 But sci-fi was turned into science-faction as we found ourselves walking down the aisles of Indira Gandhi International airport, heading for the Gulf Air flight to wing us to Bahrain and then over to Frankfurt.

A surreal side-note was to see the victorious Australian hockey team lounging in the airport waiting to be taken back to Oz, I suppose.

They were wearing Oz uniforms but were totally ignored by everyone.  Journeymen folks who had just won a major international tune-up tournament in Odisha - but Enoch and I could not think of a single name of a current player.

If they were the Aussie cricket team, however, the scene would be totally different with fan after fan breaking in an asking for selfies to be taken...  How fickle dame fame can be.

Our goal, however was to take to the sky, and that we did, winging our way out of Delhi at 9.30 PM and over to the Gulf.  Four hours later we taxied into Bahrain and after just over 2 hours in the Kingdom of Bahrain we flew out at 1.30 AM local time toward Frankfurt.

And so landed in the land of my Mother.  27 years after I had last visited.  And a first for the rest of the Eicher clan who were accompanying Oma on this special treat.

Thanks to Barry H. and family, we had train tickets in hand and went over to the Fernbahnhof at the Frankfurt airport.   Barry wisely suggested that I take a bit of time to acclimatitize to German roads and rules and the actual car which the saints at Good Books for All in Mosbach made available for us to use for our Deutschlandreise.

And so from the bowels of the airport we were whisked with the ICE to Mannheim. 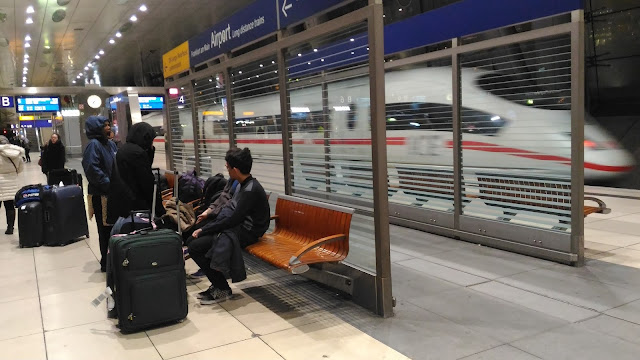 Our initial ride was uneventful and we were sitting in our connecting train for Mosbach when I asked Enoch to check out what time our train arrived at Mosbach station.  He came back to say that Mosbach was not on the list of stations.  I asked another passenger if this was the S1 train and was told no - so in a small panic we rushed off the train and our 6 big pieces of luggage... and the train then left.

On the platform was an official with the German railway.  We told us that we had been on the right train after all - that the rear portion - where we were sitting - leaving for another destinaiton some where in the trip, and the front portion moving on to Mosbach and other points south east.  He then told us that he had also been on that train and had also become confused.  Later, sitting on the next train, we were pleasantly surprised when this officer came by to examine our tickets.

The train took its winding way along the Neckar river, deeper and deeper into the German countryside.  Oohs and aahs liberally provided by yours truly.

And finally at 11 AM we were in Mosbach.

The journey of a 1000 miles, which had begun with a single step of finally heading out from Lalitpur on the 10th of December, and which had been already fueled with prayer and love, was now starting a new phase.

We were blessed with a VW Sharan - a beautiful 6 gear diesel machine which is a joy to drive.  I was given some good driving experience and tips on German driving laws and etiquette by the patient and joyful Andreas Schaefer... and then the Eichers were off by road to Hessigheim.

And that, dear friends, is will be where we carry on with our next episode.  Please stay tuned!

Posted by Andi and Sheba Eicher at 14:50 No comments: