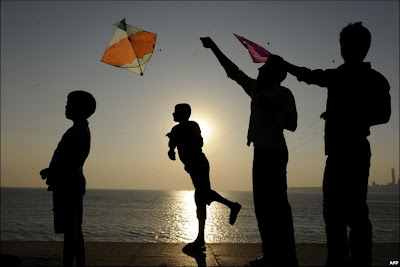 Mr. Shrishti is on the run.

His wife is 5 months pregnant, but he has not been home for 2 months now.

Apparently a murder was committed and 4 suspects are being searched for by the local police. Two suspects have been nabbed. Two are at large.

Since the cops can't find the 2 missing men - they have started after Mr. Shrishti's brother. The brother bolted to their anscestral village. And now it is Mr. Shrishti's turn.

Mr. Shrishti washes cars for a living. He is faithful and good at this. He continues to do this work. Only he is hiding. He sleeps in a room at the base of one of the appartment buildings where the cars are parked. This is his home for the last 2 months now.

We met Mr. Shrishti yesterday. He came with his wife to the JSK Positive Friends meeting.

In addition to his current troubles - Mr. and Mrs. Shrishti are both HIV positive - which is how we got to know them in the first place.

Their meeting yesterday was a small respite from the burdens that these last months have placed on them. Sheba prayed and talked with them. They have no clear answers - the closest they have come is to shift their room (rented of course) to a new neighbourhood and hope that the 2 million other residents of Thane will shield them from the police.

Its a bitter anniversary for Mr. Shrishti. Though his right to freedom is enshrined - the reality of his situation says otherwise. Article 21 (protection of life and personal liberty) specifically states that: "No person shall be deprived of his life or personal liberty except according to procedure established by law."

The procedure that actually takes place when a person is hauled up to the lock-up, when a person is thrown into prison as an undertrial, when a person's family is hounded by the cops is very different matter. We are grateful for the police force - but the grim reality that the poor face is just that - grim. The rich have their lawyers - who are able to spring them out even before they are arrested ('anticipatory bail') - but for Mr. Shrishti - and many, many others like him, the police are people to be feared.

Tonight, as I write this, he is sleeping in that small room. Mr. Shrishti is in exile - away from his 5 month-pregnant wife - and their 2 year old son.

We still have a lot of work to do in our dear nation.
Posted by Andi and Sheba Eicher at 22:47