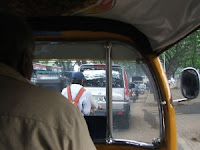 Yesterday a man was late for an appointment.

Instead of walking the 5-8 minute route, he hailed an auto-rickshaw and barked a command - telling the driver to go to a housing complex near his destination.

A minute later the man told the auto-driver to take a left turn - just before the housing complex.

The driver responded saying: "you told me you wanted to go to the housing complex" in a slightly surly tone.

The man exploded. He shouted at the driver. "You go where I tell you!" the man bellowed. The man's face was contorted with rage.

The shocked driver stopped the auto. "I say one thing and you start shouting?"

Enraged the man put down the fare of 10 Rs. on the back seat and jumped out. Grabbing the big cardboard box he was carrying, he steamed the last 50 meters to his destination at a furious pace.

I saw the whole scene yesterday.

I saw it with my own eyes.

I heard everything with my own ears.

Because I was that man.
Posted by Andi and Sheba Eicher at 07:00