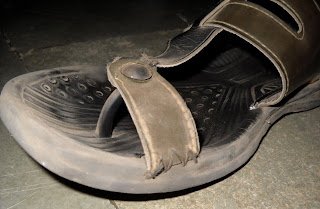 I had been remiss about fixing my chappal.

The central thong had popped out a fortnight ago, but I soldiered on. Then yesterday it happened. The last little flap was torn off - just as I was going to the office for a last minute scramble before our training programme started.

A light went on as I remembered that on my brisk morning walk of 7-10 minutes to the office, I pass a cobbler.

A stout Marathi gent, this dear man shows up from the opposite direction just about the time I pass by his shack where he spends the day cobbling. His white cap - so often seen in rural Maharashtra - and so rarely seen here in the big city - offsets his white hair and moustache. We greet each other each day as we pass by.

So yesterday I stepped gingerly toward the corner where his shack is - nursing the flapping chappal and looking forward to having the good cobbler man make it right.

Sure enough - as I reached his store - he also had arrived. His bicycle carrying the large basket he brings with him everyday. I briefly showed him the injured chappal and looked expectantly at him.

The good cobbler told me that it would take some time for him to set up shop. I made a face.

Then he did something beautiful.

"Take my chappals" he said - slipping out of his flip-flops.

I gratefully did and was on my way - walking the final 100 meters to my office in the hard plastic flip-flops of a 50+ year old cobbler.

An hour later - on my way back to the centre and the beginning of the training - my chappals were patched up and after handing over a tenner for the man's trouble I was happily walking to the JSK centre to start the training.

Walking in another person's shoes has taken a new meaning for me. The basic decency of the man stands out. Though we live in an often heartless city - it is good to be reminded of the shards of common grace that we still see around us.
Posted by Andi and Sheba Eicher at 19:28