Would you like to see a picture of a country on ice? Take a look at the shot of Great Britain absolutely frozen which I just grabbed off the BBC website. Remarkable satellite shot (not one of those hoaxes) makes me so glad I am in Thane at this time - with the only ice around being the ice-cubes in the fridge. 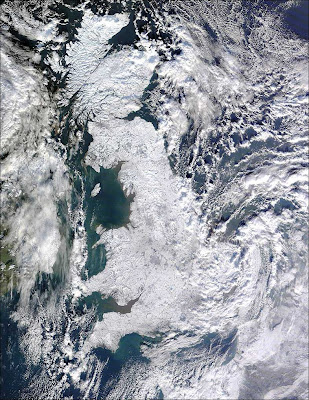 These days are about as chilly as it gets here - and we did not sleep with the fan on last night - one out of perhaps half a dozen nights in the year.

Given the huge amount of attention weather gets across societies (every second cough is explained as due to 'weather change' etc.) it is remarkable that our well built world actually regulates itself so well.

Compared to the bleak cold of most of space - interspersed with the very occasional searing furies of fire - our little blue speck is a very hospitable place. Even if large parts of the northern hemisphere (including large parts of North India) are pretty cold right now.
Posted by Andi and Sheba Eicher at 17:28