Eknath is not your ordinary pastor. For one he has HIV. For two he is (somewhat) open about his status. For three he has helped organise a network of people living with HIV in a rural part of Maharashtra.

Welcome to a small ray of hope. 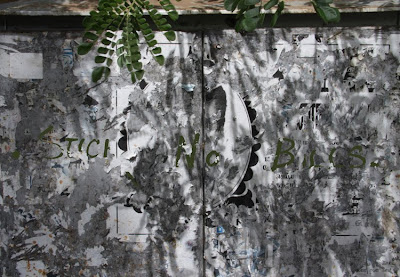 Picture from G.Mo's artblog - gmoart.files.wordpress.com/2009/08/green-leaf.jpg
Life is tough. And then you find out that you are HIV positive.

That's what happened to Eknath and Nalini - his wife. Eknath had made a decision to follow Christ as a young man. Filled with zeal he threw himself into the task of sharing his new faith with others. A short training at a simple Bible school for Marathi speakers followed and he and his wife found themselves serving as pastors for a small fellowship of Christian believers.

Things did not go easy. Money was very, very scarce. Disappointments led to choices being made and after some months Eknath left his 'ministry' and pursued a living in other ways.

Then Eknath got sick. He was admitted to a local government hospital with a bad case of Tuberculosis. They tested him for HIV. He was positive. Nalini was tested too. She too was HIV positive.

In those dark hours, Eknath turned back to God. Nalini was there by his side in the hospital, with their infant daughter (mercifully negative) and slowly nursed her husband back to health.

When Eknath emerged from the months of recuperation he threw himself back into sharing his faith - but also enrolled himself in the Anti Retroviral Therapy clinic at the District Government Hospital. Here Eknath found that there were over 1000 others who were also HIV positive - and he became part of a loose network of HIV positive people.

Eknath also shared about his HIV status with other leaders in his Christian group - and they supported him to continue with his pastoral work. One of these leaders put Eknath in touch with us at Jeevan Sahara, and we had the privilege of giving him a training in basic HIV care 2 years ago.

Eknath and Nalini's life continues to be a set of challenges. Money is always in short supply. They run a small dry-goods provision store to help make ends meet - and get a small stipend from the Christian organisation they are linked with. They would like their daugther to study in an 'English-medium' school - but the donations and fees are beyond them.

But this couple are pushing forward.

Several times a week Eknath gets on his motorbike and goes to different villages - meeting people with HIV. As a couple they spend time counselling others like them. Motivating. Organising. Praying.

I was amazed to meet Eknath recently and see that he has been instrumental in getting over 100 HIV positive people enrolled in a government scheme that gives a small pension of Rs. 750 per month to people with disabilities. It seems that having HIV/AIDS has been added as an eligibility criteria for this scheme. The sheer task of getting all the papers in order - and then pursuing the government officials is collossal - and yet this man and his fellow activists have done it!

Even thinking of doing something similar here in Thane seems well nigh impossible. To get a single paper needed (ration card / below poverty line certificate / disability certificate to name just three) presents a daunting task of dealing with corrupt local government officials. To do so for so many...

Nothing is impossible, however. And Eknath has shown what can be done - even when it seems undoable. Hats off to Eknath and Nalini - and who knows how many other silent and unsung heroes out there. These are people who are turning back the tide of HIV - by ministering to and advocating with those whose lives are already swirled around by the disease.

What a deep privilege for us to play a small part in this big picture.
Posted by Andi and Sheba Eicher at 08:06