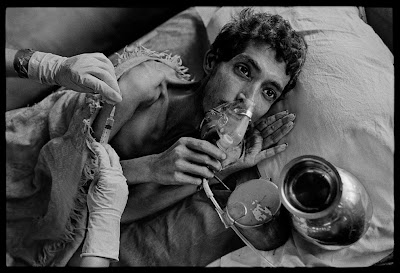 Picture of a man with extreme drug resistant TB - by James Nachtwey
It's no coincidence that there is a lot of co-incidence of HIV and TB.

With March 24th being 'World TB Day' we stop for a moment to consider that India continues to have the dubious distinction of having the largest number of people suffering from tuberculosis.

What we always knew about HIV and TB - is that in our country every person with HIV is expected to get TB sooner or later - since TB is being coughed around by people who do not have HIV - and given the compromised immunities of people with HIV.

The WHO has put out a new warning about the alarming amount of TB found in people with HIV (click here for a summary) - and the abysmal number that are being actively followed up for TB - both through detection and through proper treatment.

We know that a slew of Nobel prizes in medicine awaits whoever finally comes up with a gold-standard cure for HIV. But the story of TB is sobering - even with proven and effective drugs that can cure tuberculosis - we are still finding so many who do not take the treatment properly and end up dead - or with multi-drug resistant TB. Would the longed-for HIV drug treatment be all too different?

For a challenging look at people who are suffering with multi-drug resistant TB - take a look at: http://www.xdrtb.org

But if we are being to gloomy - lets put it away. We are so very grateful for TB medications - and for the opportunities we have to treat people with TB - be they immuno-compromised with HIV or not. While Sheba has been in Delhi I unearthed a small story I had written for Asha when she was 2 years old. It was of a little girl in Jharkhand whose mother gets sick and who is treated by Dr. Sheba for TB. Reading it to the kids last night - 6 years later - brought back the whole miracle of cure - where people who are at death's door due to this horrible bacterium - are brought back into the land of the living.

At the end of the day we are dealing with the challenge of disease. Whatever the medications available - the process of restoring and rebuilding health is always a challenge - and a miracle in progress. At the same time we also are aware of those for whom the healing processes have stopped - and for whom their bodies have given up the ghost. As we work with people - we see our own faces in them at times. How many uncertainties - and deep fears (as Yancey points out in one of his many essays on pain) - there are for the person who is made weak and helpless by illness - and being "nailed to my bed by God" which is how John Donne put it memorably.

But, oh the tangible joy of release from illness. Be it the bitter sweet one of death with assurance. Or the more shallow, but usually more exuberant one of being able to walk around again and enter the land of the normal, the daily grace of movement and eating and working and sleep.

With all the damage that TB does among people with HIV - it also proves to nadir for what end up to be amazing stories of recovery in people who have kicked the TB bacillus out of their systems (with a lot of help from loving Father).
Posted by Andi and Sheba Eicher at 23:34