We dropped Sheba off at the Borivali railway station yesterday evening. She is off to Delhi to for a 3 day seminar on Biblical Health-care and Ethics. We need inputs in order to move forward - and it is wonderful to get quality teaching like this - so we jumped at the opportunity. Having a chance to meet our new neice Anjeli Mary Rose Eicher - and also to meet Sheba's parents sweetens the trip even more.

The three of us - Asha, Enoch and I are still in Thane. Asha's 'final exams' are underway - in which she has a mercifully easy time so far - esp. as she is only in 2nd standard. But we have finished our social capital at the school and don't dare to ask for Asha to be given holiday during the exam period. Hence the three of us at home and missing Sheba already!

After 45 mins of waiting on a urine-smelling platform, Sheba's for Delhi came in between the ludicrously over-crowded local trains. When the moment finally came to say good-bye, we could hardly see her as the film over the windows blocked out most of our vision of her. Sheba's faint sillouette waved to us as Asha cried softly.

The crying didn't last long as we headed off to the bus to Thane.

Coming out of the station and walking to the State Transport bus depot, we passed a swanky AC bus waiting for a red light. I looked at the front of it and read "Thane" - it is one of the new BEST buses have recently started to ply the route. I popped in the front and asked the driver if there was still room - 'of course' he said - and in the three of us hopped! 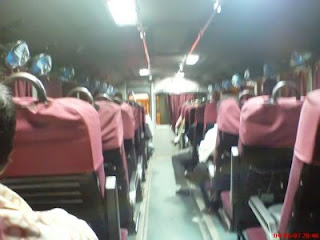 We settled in comfortably - it was only a third full - and I reached to my pocket for the Rs. 100 note to pay for the tickets.

It wasn't there. My mobile was. Bits of paper were. Some coins were. The note was gone.

Maybe it's in my pant pocket? I rummaged through each one. Like some kind of tacky play - I looked but come up with nothing. The bus started up and I was in a fix.

The first thought was to get down and call up a friend in Borivali to ask for some money. I was just about to do so, when a man on the opposite aisle asked what was the matter.

I told him what happened and he smiled and said he would pay.

We had a wonderful ride back - reading a children's magazine 'Magic Pot' and talking with each other. Thane came quickly enough and we got back in time to be there for the Young People from our church to have their weekly fellowship meeting at our home.

I had asked the man who was so kind to us: 'what is your name?'

He replied: "Parmeshwar"
Posted by Andi and Sheba Eicher at 16:20