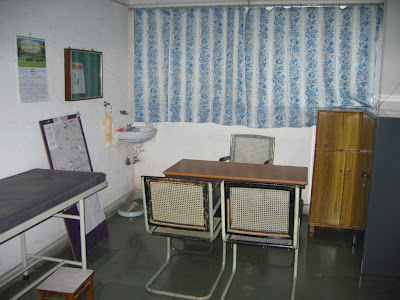 Blast from the past - part 2. This is the very first 'office' JSK had. A corner of the Lok Hospital. Photo taken in 2003 by Dr. Bryan Sauer.

This was the place where we met Mrs. Dosti. She had just found out that besides her husband being HIV positive - that she was also HIV positive. Her husband was dying at that point and the shock that she as a 60 plus grandmother also had HIV was just too much for her. She couldn't walk anymore and her grown son had to carry her to see Sheba.

Sheba talked with Mrs. Dosti and prayed with her. She prescribed a simple medication.

The next time Mrs. Dosti came in, she was walking. Sheba was thrilled to see the change and asked her if she had taken all the medicines. Mrs. Dosti said that she had not - the prayer was enough to give her strength.

We see Mrs. Dosti every other week or so. She and her family have taken a contract to clear the garbage in a building near ours. Its been 6 years since this lady has found out she has HIV. This grannie is still going strong!

As JSK is in its 7th year now, we face the exciting opportunity of going back to Lok Hospital at beginning of 2010. This time not to just work out of a small corner of the hospital - but to actually use at least one of the floors for our work.

With great opportunities come great responsibilities. We met with the Trustees of the Bethany Trust recently and shared that we are excited about this planned shift. It offers us the chance to do 4 important things:
All of this needs immense amounts of prayer. When JSK started up we had a monthly prayer meeting at an unearthly hour - I think it was 5.30 - 7 AM on the first Saturday of the month.

We have decided to revive part of this, with a weekly hour of prayer just for JSK and guidance to move forward. We meet on Saturday mornings from 7-8 AM at the Eichers home. The first two times have been a great blessing for us all!

Next up will be a review of what we have done - and putting together an operational plan for the way ahead. Some of the keys to the whole deal are:

Posted by Andi and Sheba Eicher at 00:33