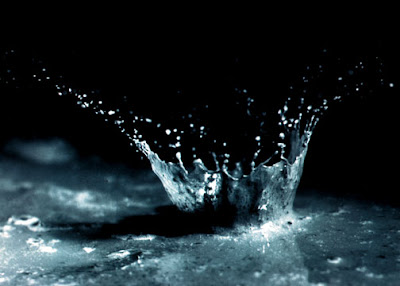 Digging up roads seems to be a perpetual hobby of whatever civic powers-to-be exist in Thane.

A small drama unfolded briefly yesterday afternoon on the shady road outside the JSK office.

Giri was had stepped out to receive a call on his mobile - and out of the corner of his eye saw the 1.5 year old son of the miller next door to draw close to a rectangle of water. The water is there because for some reason two large valve-like was protrusions from the local water-supply-mains need to be exposed to the road. Once or twice a day a loud hissing sound comes from them for a while - something to do with the local water supply towers just a stones throw away. At other parts of the day they quietly drip water - and the powers-to-be recently enlarged the space around them to form a 2 meter square trough.

Ok. The atmosphere is now set. 4 PM. Hot afternoon. No one in sight other than the odd stray dog scratching himself. Giri out on the road to get a better reception on his mobile.

He looks at this kid while talking on the phone. The kid comes to the edge of the trough. Suddenly a splash. He has fallen in. Giri looks around. No one. The kid is still under water. Struggling in what may become his little water-coffin.

A bound or two over and Giri has pulled him out. Still no one is sight. He brings the crying child and steps around to the miller who was sleeping and hands the precious - and still breathing bundle to him.

In the hot sleepiness of an afternoon a life has been saved. What will become of this little boy? Who knows. Will he be beaten as mercilessly as his two older siblings? Who knows. Will he also sleep under a vegetable-selling table, next to an old man (uncle?) while his parents sleep behind the shutter of the wheat-mill-shop?

What we do know is this. The boy was saved. He lives. He breathes.

Another small miracle as the Earth continues to spin around itself on its elliptical journey round the Sun.
Posted by Andi and Sheba Eicher at 14:12