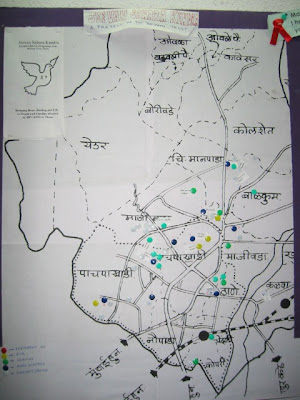 In 2003 we made a map of our work at Jeevan Sahara Kendra.

The green dots were people with HIV who were 'healthy'. The yellow ones were those who were 'sick'. Dark blue dots showed the local TB treatment centres (known as DOTS centres) we had identified.

If we were to do the exercise today, we would be putting up almost 200 coloured pins.

Looking back to our beginnings at JSK we realise again how precious each person - each contact that we make is. It is no accident for people to open up their lives to us - and the privilege we have of walking alongside our HIV positive friends during so so many of their challenging days should not be underestimated.

Of the 19 folks we had identified at that time, we have to sadly say that most of them have already died.

One of the "green dots", a man living south of the Thane railway station passed away in late 2004. He had been very bitter when we first met him, angry with life and his situation. But over time his family started participating in a local church and a great change came over him and the whole family. His body could not hold out - it was before we had anti-retrovirals at our disposal - but he died with the reality of peace in him and his family. We heard last year that one of his daughters got married to a pastor in that church.

Another one of the 'green dots' was a 10 year old boy at that time. He kept falling sick over the next few months, and in May 2003 we started him on Anti-retroviral therapy - our first person we treated with ART. This year he will turn 17! The difference that the medication (and may prayers) have made is amazing.

How will the on-going map of our relationships with people in the communities that make up Thane evolve? Here's to the desire that people with HIV will be able to be open about their status and live lives of dignity and purpose. That those who are sick will be lovingly and carefully treated. That those who do not have the disease will make wise and informed choices to protect themselves and those they love. That we will one day not have to hide names behind coloured dots.

Each person is so very precious. How quickly we forget.