India is mentioned twice in the Bible. Both times occur in the book of Esther where the extent of the Persian emperor Xerxes' empire is described: 127 provinces which stretched all the way to India (Esther 1.1, 8.9).

What I did not think about till recently are the other ancient links between our land and the Biblical narrative.

How many times had I read about Mary the brother of Lazarus breaking open a bottle of costly perfume and anointing Jesus' feet with it.

What was this perfume? It was made from Nard a plant which grows in the foothills of the Himalayas. The cost in Palestine at that time was something like 300 days of wages. Depending on how much a person gets paid that could be at least Rs. 30,000 based on a labourer's wages in a city in India - or something like US$ 20,000 if the wages were minimum wages in the US. Whatever the amount - it was extravagant. Enough to take everyone's breath away - while the room was filled with the rich scent of the perfume.

Part of the cost will have had to do with the painstaking process of gathering this mountain herb and transporting it over land or by sea. Given it being Himalayan, I would assume a land-route, but however long it took, we have the beautiful picture of something from our country being poured out as an offering on the feet of our Lord. Added bonus - Mum and Dad now live in Mussoorie - a beautiful little town at 7000 ft nestled in first range of the Himalayan foothills. Was the nard picked by local Garhwalis or by Kumaunis over in the next district? 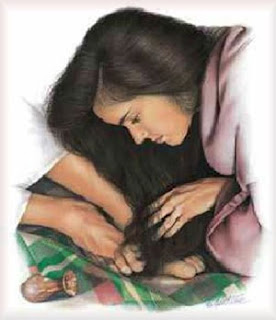 It is especially poignant to me that this took place through the hands of a woman who along with her sister and back-from-the-dead brother really loved Jesus.

Disregarding what other people thought, she boldly did the loving thing - something that touched our Lord who said that she was preparing him for his funeral.

More than physical perfume - our Lord desires that our loving acts of obedience to Him will be a sweet incense to His name. May our nation become known as the place where people live out their love for the Lord Jesus in everything that they do. May we become known as a people who are extravagant in our love. Lavishing kindness on each other and on others because of what we have received from our risen Master who has nail-pierced hands.

Posted by Andi and Sheba Eicher at 22:51