I have an image in my mind.  And every time I think of it, my eyes mist over with tears.

Its an image of two young boys close to each other, pressing against each other.  The older one with his arm around the younger.  They are looking at each other.  Their eyes are full of tears.  Big tears dripping down their cheeks.

The boys are half-brothers.  Their mother died last November.  They are being cared by two different families at this point. They have not seen each other for months.  Unexpectedly, one of them was brought to meet the other.  It was an afternoon visit.

The younger boy is in a rural part of Thane.  He was recently released into the care of the woman who is looking after him from a remand home.  The issue is still confusing, but it seems that he was abducted at some point after his mother's death and his care-giver doggedly pushed the police to find him.  But when they did, it meant a full 3 months of being in a remand home.  Something that no small 8 year old would like to go through.  The care-giver had brought the younger one to Thane on her way to her daughter's place in Mumbai - as the boy has to appear before a court next week.

She called up and told us that she was coming through.  We knew this day would come.

The older boy is our Yohan.  The younger is his half-brother Arjun.  He has a different official name, but Yohan always calls him Arjun.  Yohan has told us stories about their childhood years.  Most of them are very sad stories.  Yohan thinks about Arjun alot.  He prays for him at night.

And so here the two of them were.  Spending some precious time together in the JSK training room.  Yohan was teaching Arjun to draw when I came in, bringing with me Asha and Enoch - who had just come back from school.

They live in very different worlds right now.  Yohan has come out of deep sickness and is still being medicated heavily for his epilepsy.  Arjun does not have any health issues - and lives in a village - swims in the village pond and is outside with his friends most of the day.  Yohan is working to master basic English and Hindi reading.  He should be in class 7, but no school would be able to give him the attention he needs and so he is being lovingly tutored by Mrs. Priya Sane.  Arjun is enrolled in 3rd standard of the village Marathi medium school.

Arjun looked so small, and Yohan so big as they stood beside each other.  It was time to leave.  Arjun's care-giver said that they had a long trip ahead of them.  But the two boys just did not want to part from each other.  They stayed close together.  Pressing against each other.  Looking at each other.  Looking down at the floor.  Tears flowing.  And not only the boys.  Each one of us in that small group had our eyes swimming.

The last few months have been the proverbial roller coaster for us.  We have focussed on getting Yohan stable - and there is still work to do - but we are blessed to see a big jump in his CD4 level.  We are trying to get Yohan enrolled in the National Open School curriculum - and are still not where we want to be - but are making progress.  We have switched his epilepsy meds as he has had 3 seizure episodes while on medications.  We are working as a family to adjust and adapt to our new member.  Lots to still learn and grow in this area.  And we are now 3 months into our initial 6 month foster care order from the authorities in Bhiwandi.

Sheba and I have been keeping track of Arjun through his care-giver - but for most of the time he was still in the remand home.  Only now has an opportunity arisen for them to meet.

Oh, how hard it was for the two to part ways again.  I said a prayer for all of us and we took a few photos, and then Arjun's caregiver took Arjun and they walked away.  I can still see the image of the little boy and the old woman, going up over the small bridge outside JSK.  She has her arm and sari around Arjun. 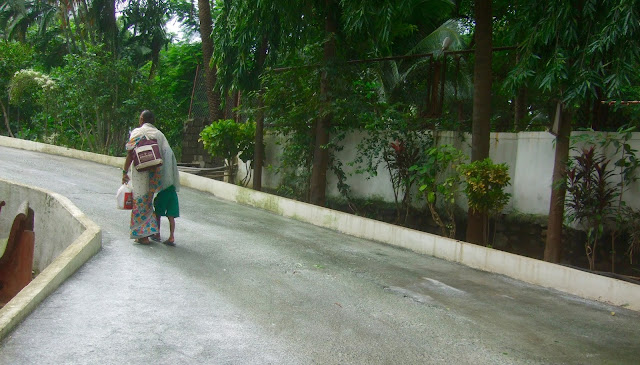 When will the boys meet next?  We just don't know and have to live it out one day at a time.

We hope to take the next step in our process with Yohan on Monday, as the authorities have told us that they have an order ready for us which will enable a local adoption agency to start the procedure for us to have Yohan legally adopted.  This seemed a distant thought just 2 weeks ago, but prayer led to us take courage and approach the authorities again.  And it looks like we are moving forward, albiet slowly.

I have a haunting image in my mind.  It is of two boys.  Pressed closely together.  Mouths curled up.  Tears pouring down.   I have this image in my mind.  It triggers a fresh ache in me - and again my eyes are misting.  I bring it back to the Lord.  We feel so helpless.  We cry out for comfort for Yohan and Arjun.  And for the Lord to bring hope and healing to these precious ones.

We don't know what the future will hold, but want these boys to grow up together, to know each other, to share a life.  We are open to discovering which ways that can happen - and cherish your prayers for us along the way.

But you, God, see the trouble of the afflicted; you consider their grief and take it in hand. The victims commit themselves to you; you are the helper of the fatherless.  Psalms 10.14
Posted by Andi and Sheba Eicher at 01:05