A train is plunging its way South as I click some keys here in Thane.

The train has lots of people in it.  Surprise, surprise.  Shall we say 1500 at least?  It is headed for Bangalore city (oops - make that Bengaluru).  And with each minute the Udhyan Express (the name of our train) is getting closer to its destination. 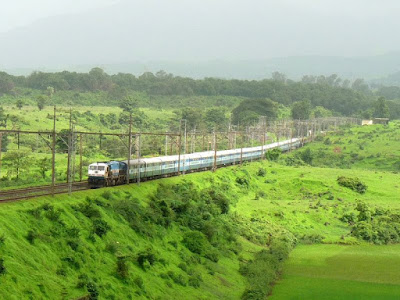 Its a 24 hour trip and they have covered 7 hours already.  The engine of the Udhyan Express is a WDP-4 - a diesel electric combo and somewhere in South India people people are seeing a scene of this powerful engine pulling the 22 odd bogies onwards, onwards....

What the passengers will not know is that the train is also being powered by prayer.  Each click clack of the track is made possible because people are praying for this train - and especially for 3 passengers aboard.

Our staff member Vikas is taking another special boy down to the ACCEPT Society Children's Home outside Bengaluru.  With him in the train are Indrajit (name changed of course) and his father Lakwindar (ditto).

Indrajit is a boy with multiple challenges.  His father doesn't know what a father is, since Lakwindar became an orphan at a small age and ran away from his home in Punjab, coming to Bombay before he was a teenager and growing up in the streets.  Indrajit's older step brother is in jail.  His other brother has taken to drugs for comfort.  Indrajit's mother died 4 years ago from HIV.

There is a young man who has been living with Indrajit's father for a year or so.  He functions as a kind of foster son and confidante to Lakwindar.  Who this young man really is not clear - he also seems to have been on the streets and now is a part of this disfunctional-functional family.

Indrajit had meningitis when he was two.   That was when his seizures began.  For the last few years, he has had severe seizures almost every day. Indrajit  is blind in one eye and can hardly see with the other.  All of 13 years now, his father brought him to us with the hope that we could do something.

Indrajit was admitted at JSK for 3 weeks.  We tried to stabilise him - and found that his seizures were becoming less.  There were even a few days when he did not have them.

His father would put him in a room and go to work - as he was the only wage earner.  And feed Indrajit milk.  For the past few years, Indrajit has only been drinking milk.  At the beginning, he refused to eat normal food when admitted at JSK, but lately started eating a bit too.

Indrajit is HIV positive too. He had been given a sub-optimal dose of medication for some years - crushed and mixed in with his milk as he would not swallow tablets.  His immunity is currently low - though we were able to start him on the proper dose and combination of drugs.

Lots of prayers have been given on behalf of Indrajit.  We just did not know what to do for him.

And so we knocked on some doors - and were thrilled when Bro. Raju Mathew of ACCEPT said that they had prayed about it and were willing to take Indrajit.

We then went into a small tizzy of getting things ready.  A quick booking of train tickets (on stand-by initially, but mercifully confirmed by this morning).  A trip to the Sion hospital to get Indrajit's ART medication transferred to the Children's hospital in Bengaluru.  No go the first time. Then tried again yesterday.  A trip by Lakhwinder to get his own ART medication.  Then the matter of the legal document where Lakhwinder gives custody of Indrajit to ACCEPT...

Some how.  Some very how. It all got done.  We booked a set of back up tickets in case it did not. But this morning at 7.30 AM the trio left Jeevan Sahara to start out towards Bengaluru, and a new life for young Indrajit.

Click clack. The train wheels are turning.  We don't know how the others in the compartment are reacting to Indrajit.  We don't know whether he is having seizures due to the fright of hearing loud sounds.  Our prayers continue. Directly to this small group of folks moving south.  Further and further away from us.  Deeper and deeper into the next steps of their lives.

How do you help a person like Indrajit?  No easy answers.  How much does he understand of our words?  Hard to say.

Tomorrow, when the trio arrive in Bengaluru East, they will be picked up by the good people of ACCEPT.  Then a new day will begin.  A new chapter for Indrajit.  A new step into the impossible.

Your prayers are the fuel for Indrajit - and many seemingly hopeless, but amazingly precious persons like him.

What will tomorrow hold?  We just don't know.  But we do know who holds tomorrow.  And cling desperately to Him.

Posted by Andi and Sheba Eicher at 17:41