On effigies and holes in roads

The festive season - Mumbai style - is almost upon us. Pandals are being built - large tarpaulins strung over metal and bamboo frames - and taking up large portions of strategic public roads. But hey - it is part of who we are in the Mumbai of 2010. Yesterday's paper said that are now 12,000 mandals in the Mumbai area alone (up from 8200 three years ago).

Now I don't know about you, but I have yet to see a pandal that is electrified by running the power line into someone's home. The local street light is there for that - the contractor's men just need to splice the pandal power line into the public power line and the current is on tap for the weeks of evening lights and the music system etc. within the pandal. Who pays? Well, those who pay their eletricity bills - which includes yours truly (Rs. 940/- this month - yet to pay - but the bill has arrived).

To speak nothing of the state of the roads.

In years past - each mandal would be asked to deposit a certain sum with the municipality to 'guarantee' that the holes dug into the asphalt will be filled in afterwards. This year the requirement for a deposit was dropped. Too complicated it seems. Let anyone dig where they want. 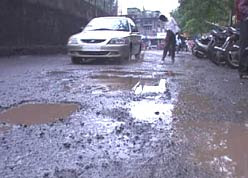 Well, this year it may not make much of a difference. Given the state of the roads in the first place - and extra 30 - 50 small holes over a 200 sq m area will not be noticable anyway.

Yesterday's paper voiced concerned from some of the mandals.

The state of the roads puts the effigies at risk.

I am not making this up. Black on white. I quote from the august pages of the Indian Express:

"Many potholes appear back to back in a single lane," he said. "Idols are 5-6 ft long and they might develop cracks due to the potholes."

"A Ganesh idol cracking would be a major social and political issue. No one should take the risk," said a mandal owner.

Just two points of interest to me.

1. If idols can develop cracks due to potholes that they have to cross twice (once on the way to the pandal, and once on the way to immersion) what about humans - who have to cross the potholes every day? I drive a scooter and have had my share of bone-jarring knocks as I have driven through puddles - only to realise that it is not puddle-deep - but that there is a lovely little crater hiding under the brown puddle water. 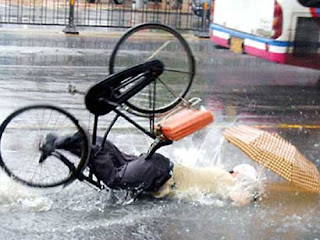 My already wonky back doesn't do well with
this unexpected massaging!

And I certainly have not wiped out in as spectacular a fashion than the dear gent on the right. But who knows when I will? And then it is not a black Atlas cycle on top of me - but a black Honda Activa scooter!

By the way, this photo has been cheerfully googled from the net. It appears only to make a point - and draw the required sigh of comiseration for the poor man whose trajectory into the pothole demonstrates basic physics so spectacularly.

2. But lets get back to the quotes above. I thought the definition of the last speaker was interesting. No name is given, but the reporter identifies the speaker as 'a mandal owner.' At first I thought "That's an odd title for a person involved with groups which are supposed to be voluntary socio-religious organisations." I later found out that there are the mandals who run the pandal - and there are workshops which make and sell the effigies to the mandals.

I think the reporter used the wrong word - but it did bring out an undercurrent. Being an 'owner' speaks of control. Being an 'owner' is clearly linked to property and has a strong wiff of earnings associated with it. You own something because you want to profit from it. Fascinating how a single word can paint a strong picture. It was clearly not the intention of the writer - especially as the article was ostensibly about bad roads - but that's the power of reportage - you know when something has the ring of truth to it.

In the meantime we have our roads perfectly prepared for training any cosmonaut who wants to make a lunar voyage in the near future. Good lunar-sized craters are to be found just outside our door. Why go to NASA for their lunar simulation - when you can get the real thing right outside your door. Courtesy your local builder-politician-corporator nexus. Paid for by our funds.
Posted by Andi and Sheba Eicher at 23:38