The first news I got was from Dad. He sent an email saying some medical workers had been killed in Afghanistan. He was pretty sure his friend Dr. Tom Little was one of them. Subsequent news reports have comfirmed this.

A few days earlier Libby Little - the wife of Dr. Tom - had sent Dad and others an update, saying that the team had just left on an 18 day expedition to a remote part of the Eastern Afghan province of Nuristan. She asked for prayer. 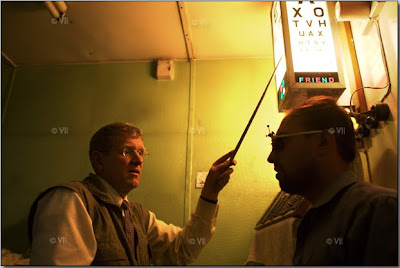 Dr. Tom sees a patient at NOOR(the National Organisation for Opthalmic Rehabilitation)
Photo from: http://www.viiphoto.com/detailStory.php?news_id=566
It is sadly ironic that a man who gave sight and light to so many others through is ophthalmic surgeries was killed in a province called Nuristan - a place which has a name that springs from the persio-indic word Noor (light). Dr. Tom Little's killers used what sight they had to aim their weapons - but are clearly blind in every other aspect of their soul and spirit.

This morning I found out another connection. As the other names of the dead were announced in the press I found out that Dan Terry was also one of the men slain. My mind goes back to 2 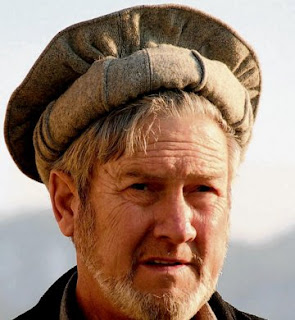 years ago when I met this giant of a man. We were walking with Dad in Mussoorie - and we met an spry elderly couple - him wearing a salwar kameez and a dignified salt and pepper beard. Dad hugged his old friend. The affection and respect between the two was palpable.

A few days later we observed the global day of prayer at Kellogg Church - and as part of the service Dad and I led the congegation in intercessory prayer for differrent parts of the world. Seeing Dan Terry in the room Dad asked him to come up and share his experience with serving in Afghanisthan. I remember being deeply moved as Dan Terry shared the deep love that he had for the Afghan people and the way that he sought to live out the love of Jesus with them. "We have to embrace the Taliban" said Dan - a statement that rings on in my mind.

This morning my thoughts wander back to that cool sunny Sunday morning in Mussoorie. Some people were too scared of Dan Terry's bear-like embrace. They chose to silence him with bullets. Dan was armed only with love - and years of blessing people. He was involved with setting up community development programmes in some of the most difficult situations possible. History shows that violence flows quickest from those who lack legitimacy. What rings in my mind is the courage and love that this man showed.

Two thousand years ago a cowardly mob stripped the Lord of Glory and had him nailed to rude beams of wood. Early followers of Christ were often called to renounce him or else face torture or death. Many stayed true their Master. Many paid the price and followed their Lord's example. Add Tom Little and Dan Terry to this list. Heaven is the richer for men who "give what they cannot keep, to gain what they cannot lose."

And we are also the richer. Our day to day existence is a prelude to eternity. We fool ourselves into thinking that our life at present is all that there is. Seeing the courage and sacrifice of Tom and Dan and their colleagues challenges the very essence of who we are and what we do day-in-and-day out. Challenges the shallow and fickle lives we live - our silly entertainments and delusional navel-gazing. If we dare to think about it - their lives point us to the deeper and more lasting.

Take a moment to reflect. Think. What is *really* important in my life right now. And what are the important things that I should be doing - but am not. Why not? Note how many excuses show up. Ask God's help. Plead with Him to help me change my life. Don't live for nothing. Life is short. Eternity is very very long.

"More light!" (Goethe's last words)
-----------------------
Do pray for the families of the slain. The children of the Littles and the Terrys studied at Woodstock School with us (though I had finished High School before most of them came to Mussoorie). The closest one to me - Molly (Dr. Tom Little's oldest daugther) - graduated 2 years after me and is currently working with the UN in Iraq.
Posted by Andi and Sheba Eicher at 08:41