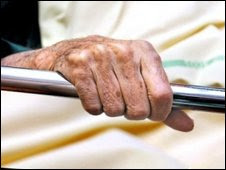 He had come earlier during the day. We will call him Nirmal. His wife and a neighbour brought him. No papers. Critically ill. Probably a cerebral TB infection. Lots of candidiasis - so likely with a very low immunity.

We felt inadequate to deal with such a sick person - and so referred on to the main goverment hospital. We told the family to tell us what happened.

After 3 hours they called. Nirmal was still in the emergency department. Other people who had come in later were being cared for. He was not.

What to do? We told them that we would try. No guarantee, but we will try.

They brought him back.

And so Nirmal has been started on treatment this evening. In our little centre. A very very sick man. Our nurses are on 12 hour shifts. Our prayers are going up too.
Posted by Andi and Sheba Eicher at 21:42