Musings on the Maoists 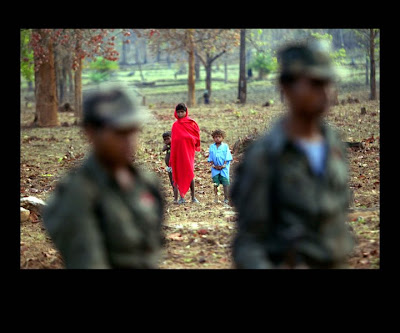 The slaughter was intense. Aapparently at least 8 Maoists also died - based on phone-intercepts. The security forces were part of 'Operation Green Hunt" - a massive coordinated attempt by the government to hit back at what has now been decades of low-intensity but fierce violence between various Maoist outfits and state security agencies.

Most of Mall-town India has little time or imagination to think about what is going on in the hinterland. Travel any train. Get off at the station and get into a state-transport bus. Take a few hours by road into any area that still has some scrub forests. You will have not only crossed dusty kilometers - but you will have gone back in time.

No more 'Shining India' here. No InfoTech parks. No clusters of Supermarkets and Food Courts. We are back in colonial days. Tiny villages. The local police picket. Empty space and the odd mining concern guarded by various levels of mafia/strong-men/politicians (often a seamless web). This is the forgotten part of our country - vast swathes of semi-arid land that most try to flee from if given the opportunity - the part of our land that sends the endless streams of road labourers and maids and hotel boys.

It is here too where various levels of ultra-left insurgents have been putting down their roots. The stakes are high. Control. Domination. The success of the Maoists in Nepal is clear. Years of efficient military action and local control by the Maoists led them to openly take over large portions of the country before becoming part of the government. The efficiency of the insurgent forces in the North East in sucking the soft parts of the state through efficient 'taxations' is being mirrored at a local level across the 'Red Corridor'. Recent reports suggest that the Maoist enterprise could be likened at least to a mid-level National Industry - complete with growth targets for revenues.

For the next few weeks we will have lots of hand-wringing in the papers about the "Maoist problem" - and then things will quiet down again. For some time.

Having lived in a village in Jharkhand where 'the party' was active, I know one thing. Local people will always lay low - and wait to see which way the wind blows. 'The party' tends to camp out with them. They may be yesterday's local tough men - now wearing 'party colours' - they may be outsiders who are dedicated to the struggle - they may be youngsters forced to pick up the gun similar to how young fighter in West Africa have been running the diamond wars - but the undeniable advantage that the party has is that it remains the most local of the forces.

This is also why one of the more focussed ways that the government has over the last few years of trying to arm local people against the Naxalites - primarily through the Salwa Judum movement in Chhatisgarh.

What has now been added is a massive escalation of the conflict. Why? Is it because as some voices claim - big industry wants to finally get at the mines and natural resources locked in these states - and the Maoists are in the way? Or is it because the years of jungle warfare are paying off - and the Maoists sense a turning of the tide? The sheer spread of the conflict means that we are unlikely to be witnessing a 'last-gasp' struggle where the Maoists are trying to prove they still are alive. The sophistication, the reach and the sheer numbers show that they are anything but defeated.

Who really calls the shots in the great large country of ours? The police officers? Local or national politicians? The voters who queue up every 5 years?

As I saw the images of the coffins of the security-men being sent home for their last rites it struck me again how many of those directly in the conflict are from the very places where the insurgency is the strongest. We are not hearing about coffins being sent to Kerala where the other family members are all working in the Gulf. We see labels on the coffins for common people from interior forested districts - where getting into the security force is one of the only ways to 'earn a decent living' - the monthly paycheck supporting the wife and kids in the village - while the husband is away in other scrub jungles doing things that they never wanted to.