When the bullets started to fly

A year ago tonight I went to sleep thinking of the big day ahead. Phillip Yancey was in town and we were organising a donor pass event for people to meet him and hear some of this thoughts. I was tired from what was the end of a 6 month preparation period - with St. Andrews Hall in Bandra booked for the programme and seemingly everything in place earlier in the evening.

We had had our men's prayer at our house till about 11 PM. After they left I saw something on Facebook that chilled the blood. Someone commented that a bomb had gone off in a Mumbai hotel. Some kind of terror attack seemed to be going on. Early in the morning the calls started coming in. Something big was happening in South Mumbai.

By 8 AM there was still confusion - but one thing was clear that Phillip Yancey's meeting would have to be cancelled. The terror attack was continuing. This was no one bomb and then silence - but an on-going carnage. Instead of a high-powered evening meeting, Phillip and Janet spent most of the day with us at Jeevan Sahara - and then shared at a small meeting at Covenant Blessing Church. We held a time of prayer at that time - while the security forces were still in heated battle with the terrorists in South Mumbai. 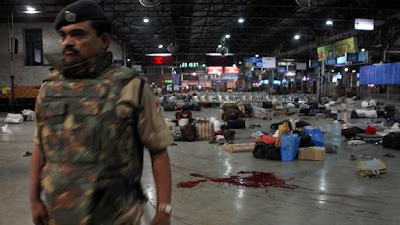 173 people died to the cruelty of the terrorists guns and bombs. Many, many were injured. Many, many are scared and scarred inside and out.

Cue to exactly one year later. Was it really only a year? It seems a lifetime ago. 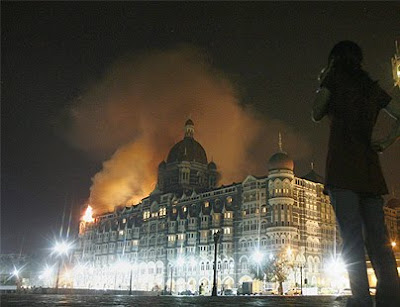 There are signs around the city remembering the brave policemen who died during the operation (not many signs remembering all those who were not brave). The youth of our housing society held a motorcycle rally at 10 PM tonight - waving flags and shouting while driving around on mo-bikes and scooters. As a family we attended a tribute concert organised by a broad-based coalition of Christian groups (Catholics to Pentecostals under one banner - and everyone in between) which featured high-decibel praise-pop in English and Hindi and a dance performance by the Covenant Blessings Church youth group (called Outrageous). We left early (for Mumbai standards) because of the kids school tomorrow - and the brutally loud volume. The papers have gradually built up a crescendo of stories - esp. trying to ferret out human-interest stories about survivors of those days.

Other than a slightly more stepped up security presence - the odd search before going into a store - the policemen slouched behind sand-bags - the sight of more guns on men in khaki - other than these fairly trivial externals, on the surface we do not seem to be any more in a state of fear than we have been before.

But how very close we are to all hell breaking loose.

One of the big prayers we prayed a year ago was that there would not be the backlash through communal rioting. It didn't happen. While it is never easy to be a Muslim in many parts of India - we still have a large amount of civility.

In fact this year has shown what we suspected all along - that terror is not synonymous with jihadism - but also comes in saffron shades as well. Over the course of this year there has been the first trickle of documented cases where right-wing underground Hinduistic groups have been proved to be planting bombs (at times purposely using Muslim garb in the process).

We are still very very far from reconciliation of any sorts. The best we make do with is 'the never-say-die Mumbai spirit' - a sort of stoic heroism that keeps on going.

Our reconciliation cannot take place because no one owns up to anything. It has taken 17 years to publish the official report on the demolition of the Babri Masjid in the holy Hindu city of Ayodhya. It was so patently clear from the beginning that the various Saffron parties were hell-bent on demolishing the mosque and building a temple on what is alleged to be the birthplace of Lord Ram. The failure of the judiciary to sort out the dispute - handling the decades-old fight about which religion is allowed to worship on the disputed area - and the conniving of the state both played into the hands of the carefully cultivated mob who did the final deed and brought the mosque down into rubble. There is nothing new here - the priests of Jesus' day were quite happy to be rabble-rousers when needed 2 millenia prior.

These are not very happy thoughts. But it is in facing the truth - esp. the ugly attitudes that we hide (not-s0-effectively too) that can move us forward. For example, a person told me last year that 'he can't stand to see the Taj Mahal - since it reminds him of all what the Muslims have done to India.' I was flabbergasted. A PhD scholar (albeit in the sciences) was the person who gave me this nugget.

Strangely, we really don't have the stories. Not just stories of navel-gazing upper-middle-classy types. Nor Mr. Rushdie's 'magic-realistic' tales (whose 'grip' and power have eroded the further he has distanced himself from India). And not just the violence-soaked 'White Tigers' - but stories that both see the wretchedness around us and bring real hope for change.

I see two sets of stories that fit the bill. One is the painfully honest narrative accounts of the Bible. We are currently reading through David's relationship with Absalom. The tragedy and the cruelty fit in very well with what goes on today. The other are the lives of our HIV positive friends that we see (or don't see) around us. For those of us privileged to work along side some of these families - we are dealing with the currency of sorrow, with the coin of desperate forgiveness.

Can stories stop bullets? Can lives make any difference? I believe. Yes.
Posted by Andi and Sheba Eicher at 22:13