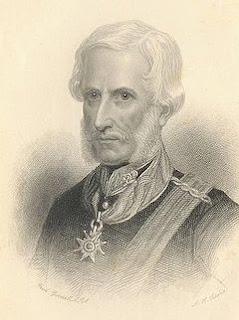 Its been a long time since I have read a stirring biography. Well, that long wait has just come to an end.

Of all the people to read about: how about Sir Henry Havelock?

Born 1795. Died during the First War of Independence / or great Indian Mutiny (depending on your take on history). That would be 1857. Pivotal year for India in many way.

But what of Sir H. He was a Soldier. Tactician. Father. Christian. Reformer.

I have just devoured a book on him by John Pollock called "Way to Glory". The book itself made its way over to our bookshelves via the jumble sale that IBL held last week. As with any good book - I found myself transported to another world.

It was a strange and familiar world - a place where the names are known, but the situations seem totally alien.

And yet it sounds like today. Havelock was part of the ill-fated Afghan expedition. The account is full of the same maddening situation that all foreign fighters in Afghanistan face - fierce locals who keep switching sides - and are ready to keep fighting. An elusive goal which keeps changing. For Havelock, who repeatedly facing fire - it was a miracle that he survived. Over his life-span of fighting 7 horses died while carrying him to battle.

After arriving in India, Havelock married Hannah Marshman, the daughter of one of the original missionary families with William Carey. His trip to India by sailing ship brought about the most dramatic of changes in this hard-driven man: a personal surrender to the claims of Christ on his life. Throughout his life, Havelock seeks to live out his faith - often to ridicule from fellow officers. We see him leading bible studies for soldiers - something unheard of and considered seditious by many. We see him suggesting that soldiers could fight without rum - something unheard of (even today). We see his deep frustrations with being denied promotion.

Parallel to his story is the stories of his three sons who become soldiers too. The eldest - 'Harry' Havelock ends up becoming Havelock's aide-de-camp in his finest hour. But the long sadness of Harry's rejection of his father's faith - and the wooing of his son through word and example form for me the most moving part of the story. Having fought through incredible odds and 'rescued' the Europeans in Lucknow, Havelock dies in his son's arms. Of dysentery. His son nursing him with love - having just days before finally come over to his father's faith in God. 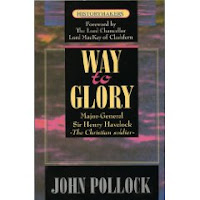 I found myself deeply moved by the book. And troubled.

I was moved on a number of points. One of them was an unexpected Mussoorie connection. It seems Havelock lived in Oakville Estate (well known for the Alter clan) at one point. Tragically, while his wife and children were at Oakville it burned down and killed a child of his. The fire badly wounded his wife Hannah and Havelock had to rush up to Mussoorie to help her.

Another moving part was to see the spiritual formation of a lonely, driven man. The ridicule he faced for his convictions - overlaid on the awful conditions of his 'job' brought back the basic question of 'how should we live?'

The troubling issues are the actual historical events of 1857. The terrible slaughter that took place. I have written earlier that we live in an age of terror. I would argue that 1857 would rank up there as one of the bloodiest years. All sides were involved in killing that was brutal.
As a person who leans towards pacifism, I found myself troubled by my being swept along with the 'heroic' progress that Havelock and his men make from Calcutta through to Lucknow.

Looking at the dawn of modern India - and the demise of many of the local empires of the time - what role should we accord the British? And in all the tumult of Empire - what role do we accord individuals? I feel foolish for knowing so little about my own country - and yet where do we have any kind of reasonable discussion on our history today?

On another track, I was (not surprisingly) fascinated to see the role that faith played in Havelock's life. One thing struck me strongly - that Havelock's persistence and success paved the way for his ideas to be widely accepted. The 'efficiency' of his life proved a powerful platform for the content of his ideas. I think that probably would be true of most of the influence that early 'evangelicals' like Wilberforce and others had on the structure of Empire.

So I end the book hungry for more. A good sign I think. Would that we had more biographies to poke us out of our stupor.
Posted by Andi and Sheba Eicher at 21:53