On Saturday we made another mini-pilgrimage. To the far-away land of Mumbai.

Far-away because moving out of our tightly-meshed life of JSK-kids-school-church means that it is very difficult to go as a family to Mumbai - let alone farther afield.

We had twin destinations on this journey. First a big jumble sale of second-hand books that IBL held at Rathord Memorial Church in Parel. It was a joy to rummage through books and pick up a small truckload to add to our library - especially for our two hungry readers - the junior Eichers... 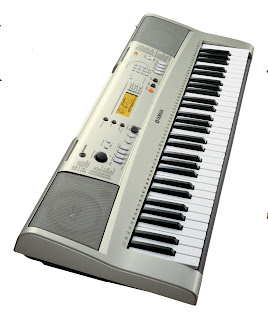 Well fortified (and heavily laden) with books - we continued South - ending up at the cavernous Chhatrapati Shivaji Terminus (known as Victoria Terminus in my youth). A short taxi-ride to the Metro cinema (taking us past the BMC building, the High Court, Cross Maidan and passing by my old school - Cathedral and John Connon) and we were in musical heaven - Furtados Music Store.

Amidst the jumble (and jangle) of guitars was the object of our trip - a Yamaha PSR E323 synthesizer. Or that's what we thought - having called up the night before our voyage across Mumbai. When we arrived the man told us that they were not in stock. We were in minor shock. But we pressed on. A little conversation by the sales staff and they brought out a previous model - an E313 which had been sent to the repair shop - but which he was willing to give with the same warranty and a discount. We grabbed it and walked out. Heavily laden (having also consumed some humongous masala dosas in between).

Enoch is now set for a musical journey. A month ago we would not have thought it possible. This week we have a machine for him to learn to play the keys. God is very good to us - we have been unexpectedly blessed by just the amount we needed to get a new one - and ended up paying even less than that! 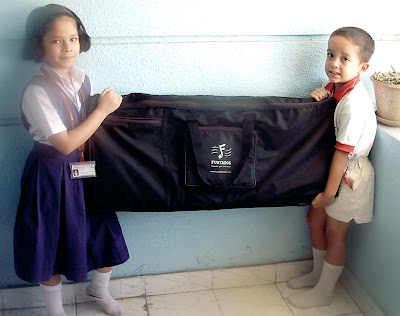 Here's to my musical mother - who always wanted me to learn the piano (and which in my foolish laziness of youth I rebelled did not do) - but who has the joy of a musical two-some in her first 2 grandkids (and probably more to come from Stefan's 'guitar' 'guitar' crew)...
Posted by Andi and Sheba Eicher at 11:25