A day in the age of terror

Its been a tough day. We had to call off the Philip Yancey's public meeting in S. Mumbai for which we had worked on for months on end. It was just not possible to go ahead with the mayhem that the city is going through.

As I write it still seems that there are still gun-men holed up in the Taj and Oberoi hotels. The body count is over 130 and many many more are injured. What the final count will be is anyone's guess. Some are saying that as many as 30 policemen are still unaccounted for. I don't think any one of us in our wildest dreams could have imagined such a horrible set of events.

Since the meeting was cancelled - and we had given out over 800 passes for this - we had a lot of phoning to do. And a lot of phone calls coming in. Some just wanted to know if Philip was safe. Others about the meeting. It was painful to say that we had cancelled the programme - but none of this compares what so many families across the Mumbai area are facing tonight - as they have lost family members - or are caring for the injured - or just don't know what happened yet...

In the middle of all of this gloom - we were privileged to host Philip Yancey this morning for a brief visit to Jeevan Sahara Kendra.

Philip met with our staff and heard some of their stories. Then he graciously encouraged all of us to carry on what God had given into our hands - and that it was very very valuable - especially since we have the privilege (and challenges) of serving Jesus among those who were most attracted to him - the poor, the outcaste, the down-trodden.

Then in the evening there was a small get-together at Dr. Stephen's house. In the salon-style group conversation we had with Philip and Janet, they shared about how he writes and the deep influence Dr. Paul Brand was on him. Philip mentioned that his experience with the church had left him so bitter and angry, but it all changed after meeting Dr. Brand. Over the years, Philip closely scrutinised him from all angles (his practice, his nurses, his patients, his family, his own life) and found Dr. Brand to be the real deal - a person totally changed and living out a Jesus life. "It only takes meeting one real Christian to turn someone around" said Philip. He also shared how odd it felt to come to India without Dr. Brand (who died 1.5 years ago) - and how much of a father-figure Dr. Brand had become (Philip's eyes were full of tears). 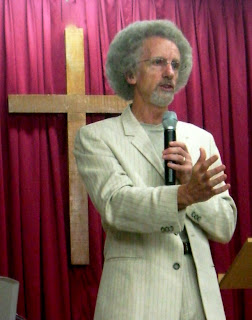 Later in the evening we gathered at the Covenant Blessings church for a time of worship and prayer. We prayed specifically for the city - for the victims as well as the perpetrators. A new friend of ours - Dayanidhi Rao sang - and Philip shared. So much could be written about what he said but here is a thought or two: Philip said that we needed to as a church be welcoming those who were not quite the same morally, not quite the same doctrinally, and that we should be a church which houses both the oppressed - and those who had been doing the oppressing!

It was powerful to hear Philip talk about his experiences with NYC and 9/11. We feel the same deep sadness and confusion when we see the ruthlessness of the men involved with these attacks in Mumbai. At the same time - what an opportunity to bless - to pray - to share love and compassion with those in such need. Philip shared about meeting with the KGB in the newly opening up Soviet Union. He realised that in the 30 years till then - he had never prayed for 'his enemies.' And yet at that meeting, one of the KGB officers said that Russia needed to learn - along with Glasnost and Perestroika - the word for 'Forgiveness.' The same man apparently later became a high ranking general in the Russian army - and purchased 2 million New Testaments - which he gave out to each of his men.

We ended the day with Martin and Saro over for a quick bite. What a privilige to be with wonderful people. As we go to sleep, we know that there is still much fighting, hatred and chaos - but that our Lord is looking over us - and that beauty, kindness, gentleness and love can flourish even in days of terror.
Posted by Andi and Sheba Eicher at 00:41