The poor will always be among you.

And so will the destitute – at least until our Lord returns.

Thank God for places like the Pandita Ramabai Mukti Mission – which is in its 120th year of caring and rehabilitating the destitute. People like Mrs. Tamin – who was living outside on the pavement at Happy Valley, where we live. Mrs. Tamin’s brother and in-laws live nearby – but she was abandoned after her husband’s death last year. This Marathi lady who was highly pregnant when our staff first noticed her – and who gave birth to a beautiful little girl which our staff helped name as “Esther.” 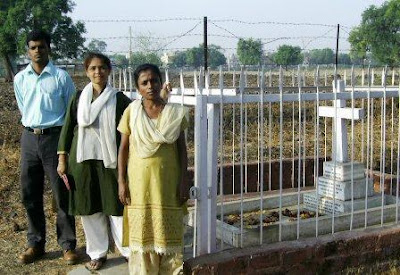 Giri, Lata and Sunita at Pandita Ramabai's modest gravesite
After repeated efforts to get Mrs. Tamin’s brother to take her in, we found ourselves looking for places where this abandoned woman could go – only Mukti Mission seemed a real option. Just as we were about to send her, however, a local social worker took Mrs. Tamin to the police station – and had her give up the child to a remand home. Mrs. Tamin thought that they were both being looked after – but found out to her horror that her 2 week old baby was taken away from her. She was literally driven away. Again.

It was enough to send her around the bend. And it did. Somehow she had a tract on which Lata, one of our JSK staff had written her phone number. Mrs. Tamin called Lata up and was guided back to Thane. But now she was in a worse condition than before. Clearly mentally disturbed she sat on the pavement in front of Happy Valley in the cold, gesticulating, mad.

After much spadework and advocacy we were finally able to get the child back to Mrs. Tamin – and both admitted at Mukti Mission.

The next 2 months were a deep struggle for our friends at Mukti as they grappled with Mrs. Tamin’s mental unbalance – but the child has thrived and with the loving and firm care – and much prayer and love by the dear people at Mukti - Mrs. Tamin too has slowly returned to her right mind.

The story is not yet over. But just one of the many miracles that keep taking place at Mukti Mission. Pandita Ramabai started Mukti with prayer – and saw many miracles over her years of leadership. Times when there was no food and when it arrived miraculously at the gate. The current administrator – Mr. Jagdish Solanki shared that he has seen the miracles continue. On one Christmas there was a severe cash shortage. It looked like it would not be possible to do anything for the almost 2000 who make up the Mukti Community. But then amazingly a man came and decided to give Rs. 1,25,000 in cash! Enough for all the girls to get dresses and for all to have a Christmas dinner. 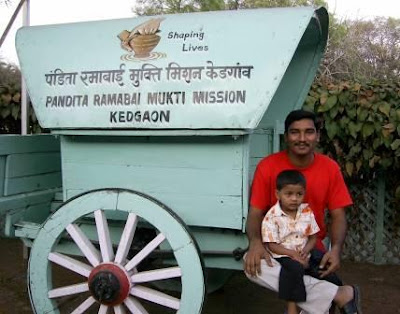 Daniel with Nivedan - Rahul and Varsha's son at the main entrance to Mukti Mission
So this was the place that we as the JSK team were destined to go to for our Staff retreat for 2009. And what a time we had…
Posted by Andi and Sheba Eicher at 18:24