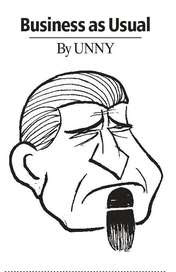 Today's Indian Express carries the masterful cartoon of Jagdish Tytler - old style Congress politician - and accused of spurring on the anti-Sikh riots in 1984.

Look closely and you will see that the trade-mark goatee of Mr. Tytler is replaced with a boot print. The reference is to a shoe that was thrown at our home-minister a few days ago by a Sikh journalist, who was protesting at the 'clean chit' given to Mr. Tytler by the Central Board of Investigation - just in time for the general elections this month.

The Congress party has done an about turn after trumpeting Mr. Tytler's 'innocence' in the light of the CBI report. Yesterday it unceremoniously dropped Mr. Tytler and another veteran politician as their candidates from prestigious parts of Delhi.

I think that the shoe throwing epidemic has gotten clearly out of hand. The Bible teaches us to respect those in authority - even ones whom we are pretty sure are not adhering to the Shalom life. Daniel serving under the often brutal Kings of Babylon / Persia comes to mind. Paul speaks pretty clearly on this.

But what is more interesting to me is how shame seems to be the weapon of choice - and seems to catalyse some form of action - even if only temporary. We have had committee after committee examine the various atrocities / riots / communal clashes etc. and very, very rarely does anyone get convicted.

A single shoe - thrown at the Home Minister - not even at Mr. Tytler - has cascaded into Mr. Tytler being policitically too hot for Congress to handle. They are not admitting guilt in any way, but they want to distance themselves from a potential embarassment. Shame at work.

Someone said that in our society the concept of sin is not being found out. Not causing disgrace to your family / clan / jati / group. This certainly seems to be bourne out in the way that many cases are handled. We keep hearing the canards that 'our boys are good boys - they would never do something like that' etc.

But lets look east. In Cambodia an amazing trial is taking place:

A man who is credited with overseeing the torture and killing of so many is now asking for forgiveness. Can such a man be forgiven? He is the only one from his generation and seniority who is doing so. The difference between Duch and his colleagues who were active in the killing fields is that Duch has professed a conversion to following Jesus Christ. Press reports vary widely in their take on this - with some stating that Duch claims he was just following orders - to others (such as the one quoted above) talking about Duch asking forgiveness for his actions and taking responsibility for them.

I have yet to hear a single person - a single one - big or small - ask forgiveness for what they did against another religious community here in our beloved land of Bharat.

There is an emotional scene in the movie Gandhi which comes to mind: where the leaders of the various bands of rioters come into the room and throw their weapons down at the feet of the hunger-fasting Gandhi. Sadly, that seems to only happen in the movies.

We are a country poor in forgiveness - both the asking of it - and the giving of it.

Till true repentence comes - till real forgiveness happens - we will continue to have shoes hurled. And worse.
Posted by Andi and Sheba Eicher at 23:58