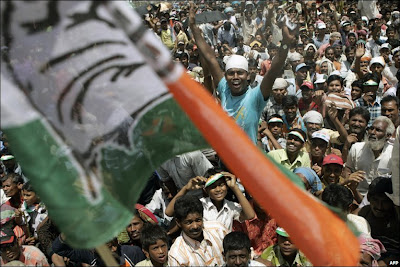 Here we are in the midst of a gargantuan election, where even some of the parties' symbols are elephantine - and actually very few people care.

"What's the point voting" says the elderly Tamil gent I meet in the lift early in the morning, him clutching a bag of milk and I holding a loaf of bread "they are all the same - they only look after themselves and get rich."

Our political class is flying around the country but the streets seem strangely listless and drab. The buzz of previous Lok Sabha elections just doesn't seem present. We have facebook groups, though none of the folks that I am in touch with have posted a single comment to do with the elections (contrast that with the steady chatter my American friends had in the pre- and post-Obama days). Advani wants to do an Obama and has been buying oodles of eyeball space on various sites (its funny to see him show up on Christian sites that have advertising), but I don't think it will cut much ice. The Americans love to do their part - and Obama's folks kept up a steady stream of amazingly engaging emails urging various ways of participation (including the small donations...). I somehow got on the list and was amazed to see how slick - and how down-to-earth many of the communications were. We have a long way to go yet to duplicate that kind of merchandising of a candidate.

The heat, the naxalites have and will play a role in the relatively low turn out and the fairly listless movement. But probably the real challenge rests on two issues.

One issue is that we seem to be surrounded by leaders who just are not able to generate any excitement at all. What does the Congress talk about? Pani, sadak, bijli. Where were you folks the last 5 years? What is the BJP's latest? Foreign bank accounts! Help! Where was all of this before last week?

The second is the more ominous one. We are unlikely to have any one party who will 'win'. That means that we are in for the worst kind of horse trading you can think of. Everyone has ditched each other and is ready to enter into any kind of liason - as long as it leads to power.

Surely this is not what an election is meant to be? It reminds me of the Weimar Republic with its many small parties going into monstorous and short-lived coalitions.

The current German constitution has an interesting clause - no party that does not tally more than 5% of the total national vote gets to sit in parliament - even if they have candidates who have won from local constituencies. The Greens have been in and out of the parliament because of this.

It would be my small suggestion to the good folks who frame our countries laws (sadly these are the very chaps who thrive on the current system, but here goes anyway): h

ow about something like this in our wonderful land. Let those who seek to represent our local constituencies be part of a party that has at least 5% of the popular vote in our country. This will make parties more than just a platform for folks who just want to get ahead.

For me, the most bizarre example of this was the 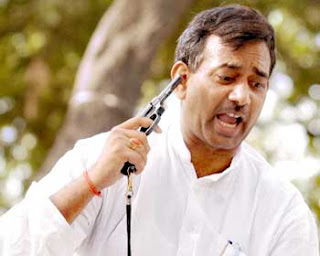 man who 5 years ago threatened to kill himself if Sonia Gandhi was not made prime minister. Pictures of him with a pistol to his head were splashed all over. At the time there was plenty of tut-tutting about how subservient the Congress rank and file were. Well, today the same man thinks nothing of fighting this election with a different party. As with many, he has found a home with the Elephant of the BSP. Asked about his actions then, he just shrugs.

And so it goes. Our amazingly adaptable political class continues to astonish. The value of having a 5% rule, however, would force those who seek to rule the country - to have a trully national presence - rather than ruling their regional fiefdoms and then showing up to tilt the balance of power (in return for disproportionate say in national governance - let alone the issue of disproporionate assets).

On to April 30th then (when our fifth of the country votes) and then the next 2 weeks before the ballots start to be counted on the 16th of May - and we all find out who our new rulers are.
Posted by Andi and Sheba Eicher at 22:53