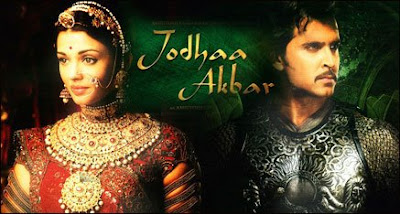 We have not seen the film Jodhaa Akbar. And are unlikely to see this confection that Ashutosh Gowarkar had dished up. But the film - a romance between the Mughal Emporer Akbar and Jodhaa - a Rajput princess - has already caused plenty of hearburn.

Groups of Rajputs - or should we say groups of people claiming to represent the Rajput caste (they use the word community but this is what they are) - are claiming that this film is unhistorical and puts their community in a bad light - hence it must be banned. And that is what the state governments of Rajesthan (of course), Madhya Pradesh and Uttar Pradesh have done. The Supreme Court has stepped in and (at least temporarily) lifted the ban.

The point here is this. We are now at a point when any group can claim that any film / book / magazine is objectionable and will lead to law and order problems if it is allowed to be seen. The law and order problems? Rioting and looting by the very people who say that the offending item be banned to prevent rioting.

Something is fundamentally wrong with our beloved land when the rioters are given honour - when the ones who provoke and destroy are 'protected'. We have seen this time and time again in our dear country - artists like M.F. Hussain are in exile because they are being dragged through the courts, films like Water could not be made in Varanasi because it was objected too, writers like Tasleema Nasreen are roughed up in public by the so-called guardians of the Islamic Community. The DaVinci Code film had various Christian dignitaries imploring the government to ban the thing (never mind that the book is read by all and sundry and not many Christian notables have the time to mount a decent critique of the fallacious page-turner Mr. Brown has churned out).

We stand at a crux in our country - unless the courts and other partners in civil society allow a wide variety of voices to be heard - we will never be able to be the open and learning community we hope for.

Perhaps most disturbing (as pointed out by Pratap Bhanu Mehta - here) is the recent Supreme Court ruling asking the author James Laine to delete certain paragraphs of his book on Shivaji that the "interest of justice would be best served.” Whose justice are we talking about? The justice that says if you write a scholarly opinion - backed up by the facts you have marshalled - and someone takes offence and trashes a place of higher learning - that the Supreme Court will suggest that you delete certain paragraphs so that the people who smash are appeased? Justice? Ha!

Pray for our dear Land! We have been blessed in so many ways by a judiciary that speaks its mind - and clearly steps into places where many would be shy of treading. But every now and again we hear something that is clearly wrong. But which meets with deafening silence. Or the continued demands to ban.

So, no Jodhaa Akbar for us. Not because of the Rajput angle, but because we just don't have the time for that fluff - but do I ever want others to have the right to see the flick if they want. We don't want the mob making rules for us. Keep it up Justices! Just don't give in like you did for the Laine verdict.
Posted by Andi and Sheba Eicher at 22:59