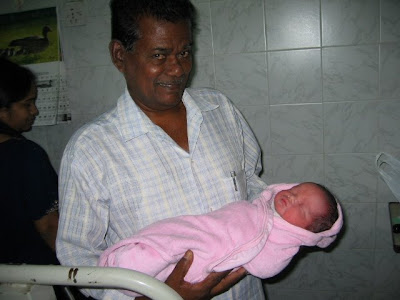 Appa at Enoch's birth - 19.2.2003
Today we celebrate God's goodness in the life of Savari S. Rajan - our beloved father - as he completes 70 years since he was born on the 2nd of March 1938.
.
Born in Trichi, Tamil Nadu, Appa grew up without a father - his Dad having gone to Malaysia soon after the Appa and his sister was born. The remittances came from Malaysia, but his father never returned.
.
As a young man Appa had various adventures, working in a factory in Mysore and in the jungle camps of the Nilgiris. Then, he up and left the south - hearing about a huge new steel factory that was being built in the forests of Orissa and the job opportunities there.
.
Arriving as a teenager in Rourkela, Appa was hired. He worked over 40 years for SAIL - the Steel Authority of India Ltd - in their Rourkela steel plant. He worked in captive mines and in the plant itself. In the heat of the blast furnaces and the grime of the mines that fed the insatiable steel smelting plant. He didn't tell his mother where he was going - preferring to go first and inform later.
.
In many ways a self-made man - he taught himself English by reading the newspaper and listening to the radio - Appa has always had a thirst for adventure. Be it the early political 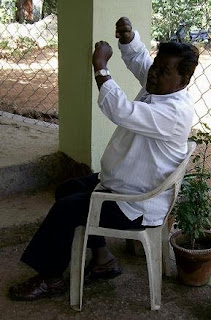 activism of the rationalist movement and Dravidian politics at a local level (he met Karunanidhi once in those heady days) to the jungle experiences which have provided many hours of stories for wide-eyed grand-children (see picture on right of Appa telling the famous 'Donkey Tiger' story) - Appa lived life to the fullest.
.
It was in Rourkela that he met some Tamil-speakers who were going to a certain meeting. Little did Appa know that this would be the turning point of his life. He was confronted with his own true nature - a lost, broken man - searching for hope. And he found it in the person of Jesus Christ! The group was a local assembly of the Hebron Fellowship - which Appa joined then and there and has been faithfully worshipping with over these 50 years since!
.
It was in the fellowship that Appa was introduced to a young Telegu lady who had just got a job as a clerk in the steel plant. Anna Victoria Krupa Star became Mrs. Savari Rajan soon afterwards at the Bethany Assembly. Four children following in the space of 5 years. The days were tough, but Appa and Amma worked hard, prayed hard, saved and invested in their 3 daughters and 1 son. Clothes were made at home. Every way of stretching the salary rupee worked out - but at the same time God and church took primary place.
.
In the years before retirement, Appa and Amma bought a small plot of land near Vishakapatnam, Andra Pradesh. Over the years they gradually built a small bungalow on this plot. A few years ago it was broken into - while Amma and Appa were with us in Thane - the thieves did not leave with anything as all they found were some life insurance policies - an old fridge and an old TV. No gold. No cash. Appa's investments were in the family - and the homes a testimony to frugality and hard work rather than what the thieves probably expected - lots of cash.
.
Appa's mother eventually came to live with them and help out in rearing the kids. Appi as she was fondly known - poured herself into Daisy, Bethsheba, Sarah and Peter with great devotion. She had come to faith during this time as well. The family moved from quarter to quarter as time went on - but their spiritual home remained in the Bethany Assembly.
. 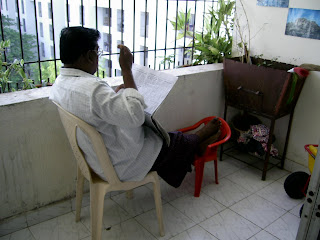 Appa's health has not been good. He had a massive heart attack 8 years ago - one which the Drs. gave a 5 year life-span after. He is still alive - and conscienciously takes his heart meds and his diabetes meds every day. When he was with us last year he tripped and fell badly - but did not suffer any grevious damage by God's grace. We pray for Appa's health every night!
.
Appa has seen all his 4 children grow up. Be educated well beyond the opportunities open to him (1 Phd, 1 MD, 1 MBA and 1 Hotel Industry trained). Marry godly spouses. Grow in faith.
Spread around the world (US, Kenya, Delhi and Thane). Have children of their own and instruct these in the faith (4 girls and a boy).
.
On the last Sunday of 2007 we had the unique privilege of being with Appa and Amma at their Hebron congregation at Gajuwaka, AP (the Bethel Prayer house) - a time when two of his son-in-laws and his son gave messages in the fellowship and the family sponsored a meal for the whole fellowship. God has been very good to our dear Appa.
.
We salute Appa on this day - amazed at God's goodness over these 7 decades. We are awed by the distance he has travelled in his life - his life of faith and devotion to God. His love and care for all of us in the 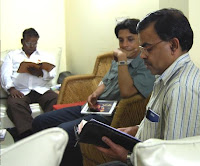 family. His unfailing desire to see the good news of Jesus spread.
.
We are proud of you Appa - Thatha to the grand-kids - and thank God for you!
.
Post Script:
On the evening of the 2nd a prayer meeting was held at Victor and Sarah's flat in Delhi to thank God for his mercies in giving 7 decades to Appa. Sarah sent her regards from Australia via Skype as she is away for 2 months on a course there. Joanna was thrilled that Ashish Eicher also came over for the festivities. Bro. Prakash George shared from the word and all had a wonderful meal cooked by Amma. 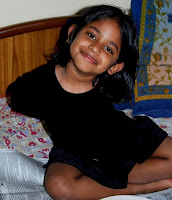 We Thane Eichers wished we could have been there in the flesh, but know that this is the challenge of distance that all of us face. By God's grace he has taken us all this far. We look forward to the day when all of us can look back like Appa and thank God for his grace over so many decades!
.
At least we can virtually join in as Amma feeds her beloved husband his birthday cake! 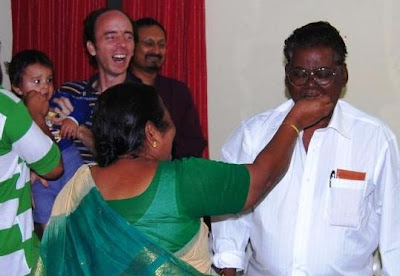 Posted by Andi and Sheba Eicher at 18:19