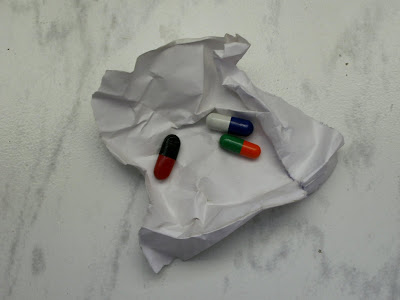 We met a man recently. We will call him Ashok. Ashok has HIV. He works as a daily wages labourer. Lifting things. Shifting mud. Using his muscles for some rupees at the end of the day.

As our staff got to know him, they found out that Ashok is taking treatment for HIV from a local doctor.

"What drugs are you taking?" they asked. "HIV medication" the man said.

"Can you show them to us" our staff probed further. Sure, said Ashok and fished out the capsules that you see in the photo above.

There is no way, no possible way that these are anti-retroviral drugs. Ashok has been duped. He has paid more than 3000 rupees for these bogus pills. He has been doing this for 3 months before we met him.

Another example of the parasitic way that people make money off the poor and those in trouble. These bogus drugs have not come cheaply either. They have cost many days of work for Ashok. In addition, the doctor has done certain 'tests' at astronomical rates.

And then there are the dozens of quacks who claim various 'ayurvedic' cures that will 'cure guaranteed'. They are never free - and they don't work. We have too many dead friends to vouch for that.

Dead men don't tell tales. Dead people who died from HIV don't come back to the quacks asking for refunds.
Posted by Andi and Sheba Eicher at 20:18