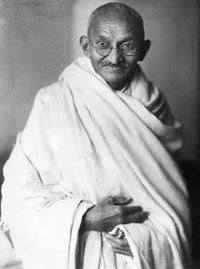 In the midst of a season of festivals - today the nation remembers Mahatma Gandhi.

Perhaps the term remember is a bit strong. Other than a few advertisements from government departments in the newspaper claiming to be following 'Gandhian' principles - and a few desultory activities here and there there is not much to show.

I did pass a small group of well-fed people wearing white base-ball caps were weilding the odd broom - a 'clean-up' campaign which seemed to be cosmetic at best - esp. since I had seen the paid sweeper cleaning the same area earlier in the morning.

The closest most people come to Gandhi today is touching his iconographic image which has been placed on all our currency notes.

Gandhi is basically a non-entity today - other than for a few wizened souls. He remains a distant saint-figure - like Mother Theresa has been turned into - rather than the lively, intelligent (cunning?) leader he was.

Love him or loathe him - the man stood for a complex and vibrant set of ideas. Today the toadies we see strutting around have long since left any shred of igeniuty - and integrity - behind. Heaven help our dear country.

Posted by Andi and Sheba Eicher at 11:54