Not many in this world have a mother who goes on a high-altitude trek in her advanced years!  Well - Stefan, Premi and my-goodself do!

Here is Mum's story of her latest adventures! 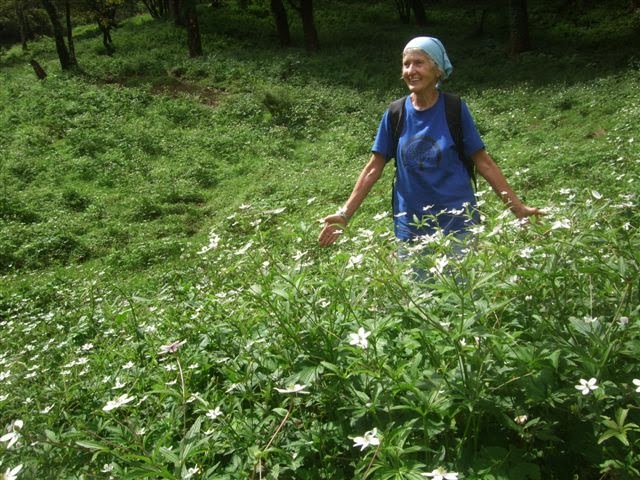 How did it all start? Friends of ours from Chandigarh visited us at the end of June this year. As they talked about an upcoming hike in the Himachal Pradesh Himalayan mountains I got very excited and as a result they invited me for the trek.

So, during the month of July I went every day for l or 1 ½  hours walking up and down the Tehri Road in Mussoorie to get myself fit for the trek. It also became a prayer walk.

I left Dehra Dun on June 30th by bus and was very welcomed at the home of Scott and Anita at Chandigarh. Anita told me, that Scott (47 and their daughter Hope, 18) were very fast hikers!! This confirmed my  suspicion: how will I keep up with them? However,  I was immensely relieved, when she told me, that Scott and Hope needed to have a lot of time together to talk, as Hope just had returned from the US for a short time and that I would be walking with the guide, at my pace.

In the guest room was a picture on the wall with the following text:
“The Lord is faithful, and He will strengthen and protect you”  2 Thess 3:3

That was exactly for me and I was so encouraged by it. I claimed this promise for my trek. We left the next morning by car for Naggar,  the start of our trek.  It was almost a day’s drive. We stayed in a very nice hotel for the night. 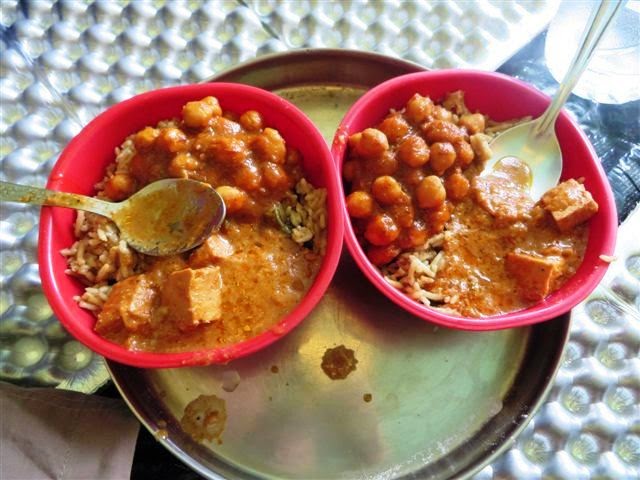 At 6:00 am Bintu, our guide was ready for action. Our plan to get a mule did not work out. Bintu had instead arranged for 3 porters. I had everything in my backpack,  but there was a lot of luggage with readymade food packages (also for the porters), 2 tents etc. We started out at 6:30 am. Right from the beginning we walked straight up the steep mountain. 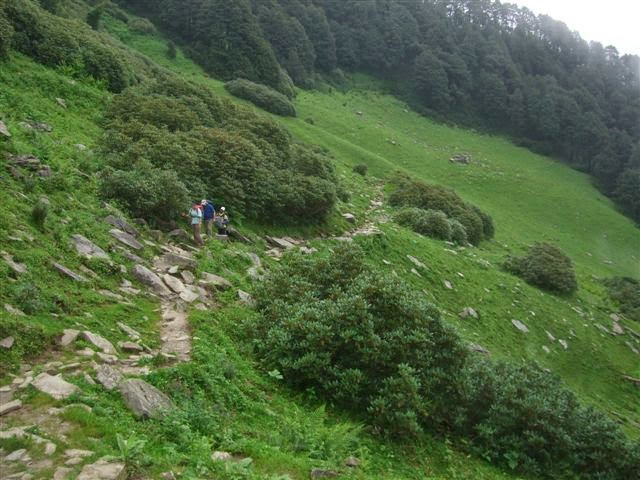 After a while, we had breakfast on  the trail.  We continued to walk up and up the mountain, taking small rests in between to drink some water and eat some trail mix.

We were in beautiful woods with different kinds of trees. Certain fallen leaves sparkled in bright green color with orange dots. There was so much to enjoy! Anemone flowers appeared more and more often as we went up. 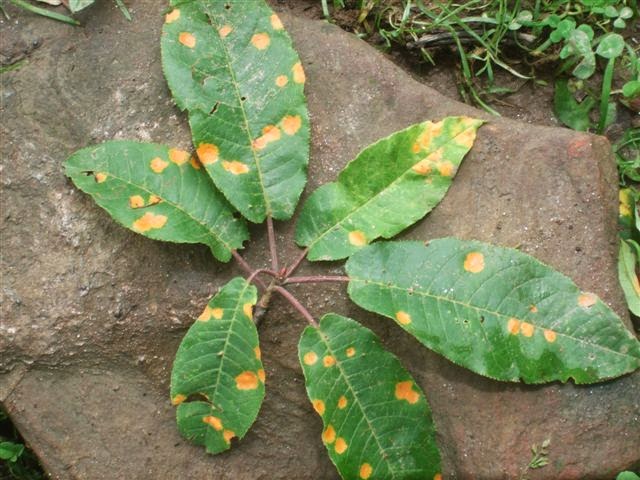 After many hours  of climbing we emerged out of the trees and entered  beautiful green meadows, full  of anemone flowers spreading like a white carpet. We continued on a small path from one meadow to the next, always higher and higher. Finally, we reached the top where some makeshift tents ( 2/3 stone wall with one yellow plastic sheet on top) of shepherds greeted  us.  We soon enjoyed glasses of delicious chai which was mostly  made out of  rich buffalo milk. 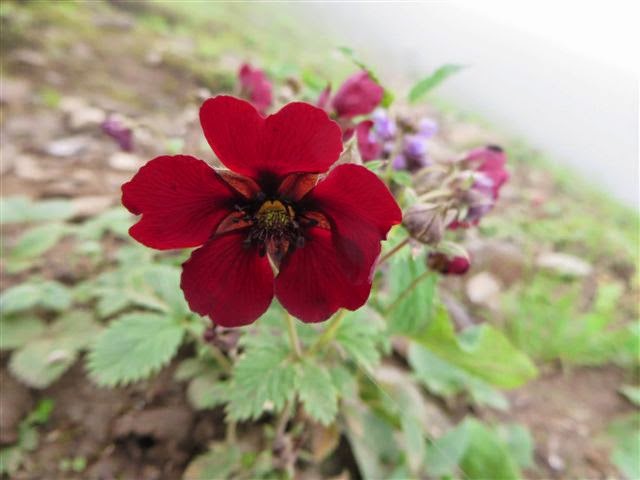 The top was enveloped with mist, we could not see anything except the nearby meadows. The shepherds told us, that  because of the Monsoon, only in the early morning the mountains could be seen. 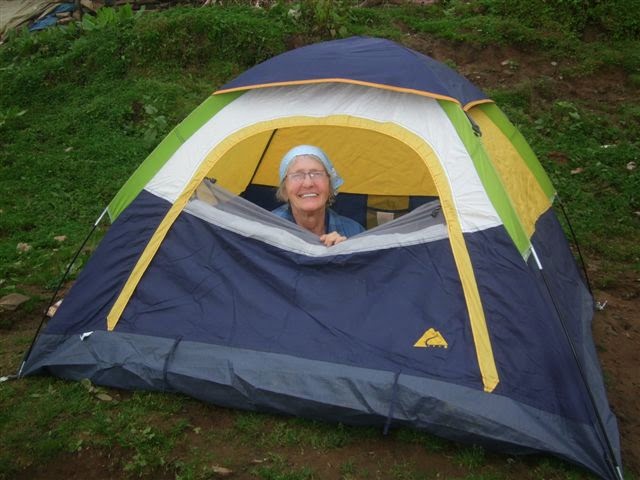 We pitched our tents. Scott and Hope stayed in a big one, I in a small one, where I just fit in. We enjoyed an early  pre-cooked supper (rice and chole) which our 3 men heated up,  tasty!  We also  drank each a big glass of  hot milk which we had bought.  Because we all were tired, we planned on an early night.  As much as I tried to sleep, I just could not. Next to my tent was a tent of the local shepherd women. They seemed to be enjoying a relaxing evening. They sang, laughed and talked loudly till almost midnite.  The men shepherds in their tent on the other side also talked loudly till late . . .

After a short night, I woke up around 5:00 am and sure enough, saw the snow mountains on two sides with a beautiful sun rise. But quite soon, the white mist and clouds covered them again. 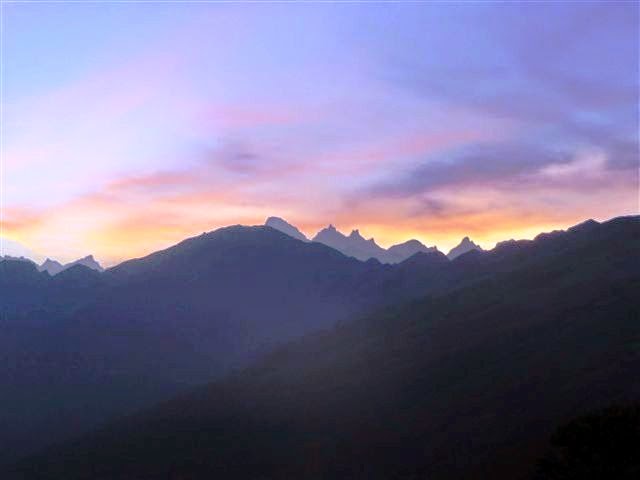 Breakfast  (magi noodles)  finished, we started out and hiked on up  to the pass (3,660 meters). On the way
up and on top we discovered the most beautiful meadows of hundreds of different colored flowers, lush grass interspersed with different kinds of herbs. No wonder the cattle grazing up there looked so healthy! 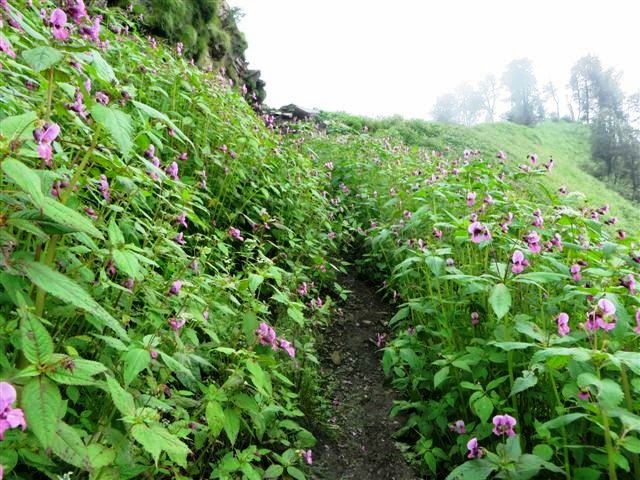 Everywhere we looked, we were surrounded by beauty. I especially liked the “forget-me-nots”, so blue in color and high (half my size).  We stayed  for a half hour in the pass, trying to soak in as much as possible of God’s amazing creation.

As we continued our trek we entered a very unique tunnel, made out of pink flowers (Impatiens or Balsam)  which reached up to our heads. It took us 10 minutes to walk on a very small path through this flower tunnel.


Now begun the real adventure ! Fortunately, we were totally ignorant of what we were going to face. . . 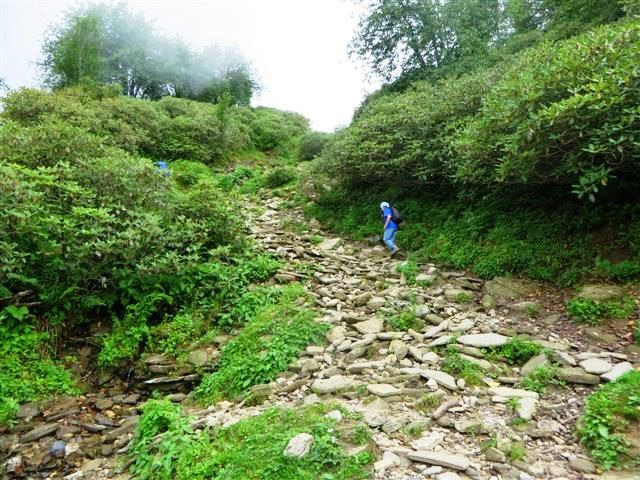 At first, there was hardly any path. We jumped from one boulder to the next. This led us to a river bed, which we had to walk in, trying not to fall in the water. After some time, we walked next to the river, but there was no path and the long descent was extremely steep. 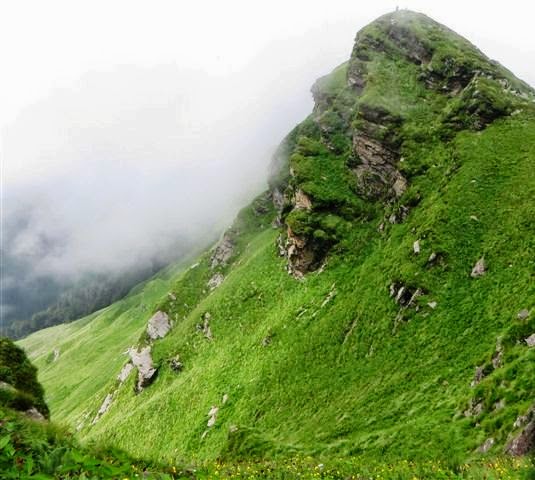 After a while it started to rain and we begun to  slip and slide on the wet stones. All of us fell at various points.  Scott and I  both fell into a huge stinging nettle bush and my arm was like on fire with many blisters. One of our porters (Meherchand)  had an immediate remedy. He plucked some fresh hashish leaves (the plants were growing all around us), rubbed it between his hands and then applied the juice on my blisters.  It sure helped to ease the pain. 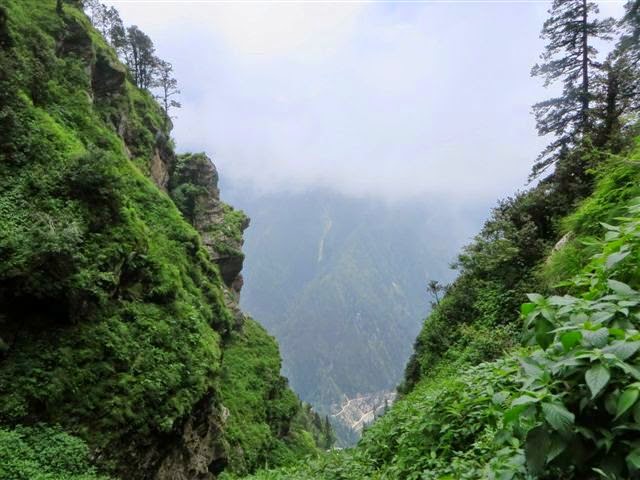 Wet and tired we arrived at our next camping place. Our legs felt like jelly! This trek is supposed to be done in 4 days, but we did it in 3 because of lack of time! We had a nice hot meal and a steaming cup of chai and disappeared in our tents.  I looked forward to a good long sleep !! Our porters stayed in a school room nearby. No sooner had I settled in my little tent, trying to spread out my wet clothes from the day to dry, when it started again to rain.  It started with a drizzle, but soon it was coming down in buckets. It poured rain throughout the night, with the result, that  in the morning I found 5 centimeters of water had collected.  I shoveled it out with my wet clothes.

On learning of my miserable night, Scott was immensely apologetic.  The tent must have lost its rainproofing.  But after a good hot cup of chai and another one of black coffee with 2 granola bars I was refreshed and ready for the day. 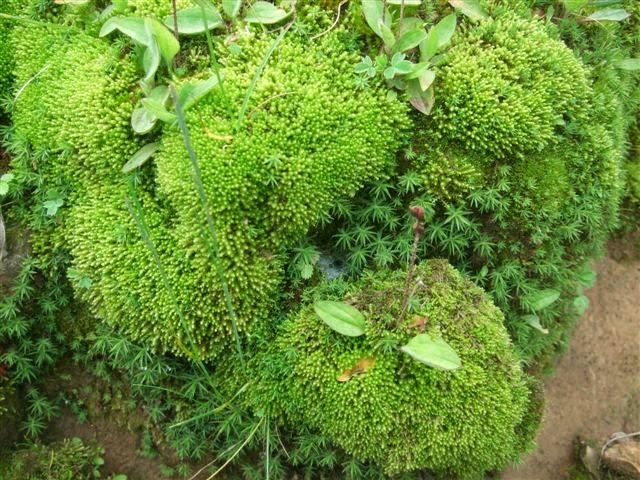 We begun our last hike with our wet clothes in plastic bags and walked through the village of Manala, then down, down, down on a well paved path to the river and again up, up, up, to Bashona where a jeep was waiting for us.

Scott wanted very much to go to Manikaran to take a bath in the hot springs. This town is a holy place for Hindus and Sikhs.  All along the road we saw hundreds of bikes with young men on them. They wore orange bandanas and often had orange flags stuck on their bikes. They all seemed quite high. There were masses of them in Manikaran. We did not have a bath in the hot springs as the water was almost boiling.
After lunch in one of the hotels, we drove back to Shat where we changed cars and went to Naggar. There we picked up Scott’s car and said good bye to our 4 helpers (Meherchand, Heralal, Bubneshver and Bindu) I gave each one a small gift as I so appreciated them, as we had become such good friends. We proceeded from there to Manali and stayed in a very posh hotel, Johnson Lodge (Your Perfect Host in Manali).  What a  difference between  my last night in the rain and this one !

Our drive back next day to Chandigarh was without any problem. Scott is a very good driver. The Lord was true to His promise in 2 Thess 3:3:  “The Lord is faithful, and He will strengthen and protect you.”    I am so thankful  for the opportunity I had to do this unique trek. 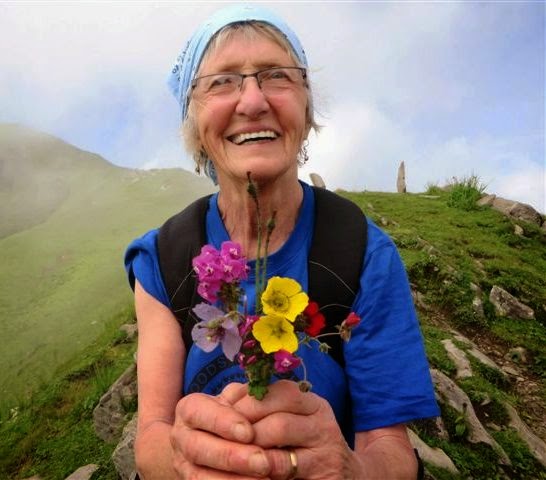 Posted by Andi and Sheba Eicher at 14:21