On the healing of the mind 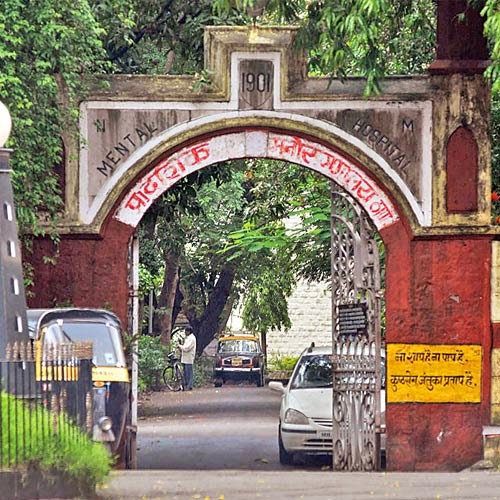 The year my German grandfather Willi Fischer was born - 1901 - a hospital was started in Thane for the mentally ill.  Today it is the largest mental hospital in greater Mumbai's 16 million plus area - a government run hospital on some 72 acres of land in the middle of the city - and with 1450 patients admitted for care and an outpatient load of something like 150 patients per day.

Last Friday I had an opportunity to go inside the hospital campus - because I was accompanying Dr. Samuel Pfeifer - a renowned psychiatrist and author from Switzerland.  He was in town to speak at a one-day conference on Christian Approaches to Mental Health which was held at Bethany Hospital over the weekend.  And so the doors opened for us to visit.

It was a sobering sight.  To see so many who were suffering from maladies of the mind.  We know that something like one in four of us will have some kind of mental illness over our life-time.  Depression - in its various forms - is probably the most common one.  I quickly run out of fingers and toes when I try to count the loved ones I know who have struggled or are walking through the dark valley of depression.

We were taken around the green campus - and shown a few of the wards.  The place is very much in the prison-solid-black-stone mould of the early Victorian era.   We were shown a male ward where 53 inmates were in one large room.  Some mattresses on the floor, some on bed frames.  The sheets were being washed we were told.   Locks on the doors.  Bars on the windows.  Men standing and sitting.  "It is past their breakfast time so they are inside" was what we were told.

Two orderlies per 80 patients.  One nurse.  The hospital uses ex-inmates who come back as volunteers to keep order.  20 doctors sanctioned for 1450 in-patients.  Only 6 of these are psychiatrists.

What can be done with such numbers?  With such a paucity of funds and human power.

And yet this is the main place for mental health.  We saw scores in the OPD.  Parents with young men.  Women being escorted by others.  We also saw plenty of police.  Many of the admissions are accompanied by a court order.

One woman came in to see a senior doctor.  She was accompanied by her two daughters.  The doctor looked at the file and asked where the girl had been for the past 7 years.  "We have been showing to some private doctors" said the woman, rattling off the names of a number of them.  "So Dr. so-and-so sent you here for admission" said the senior doctor.  "Yes" said the mother.  Of the two daughters, it was now clear who was the patient.  A plump woman who looked to be in her late twenties, the patient said "Doctor, I don't want to come here.  It is not a good place."  "Listen" said the doctor, "I am not writing anything, I am only talking with your mother.  Look, I am not writing anything" she said showing the patient her patient file.

Was the doctor lying?  I don't know.  The mother had clearly come to get her daughter admitted.  The brief glimpse I had of her was of a woman with much sorrow and burden.  And the brutal briefness at which all this took place.  Mind-spinning.  And yet this is how so many lives and destinies are shaped.   How much time can you give when you have 150 patients to see in a day? 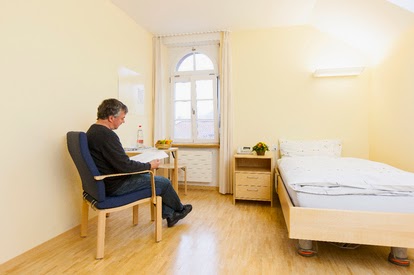 A world of a difference in some ways.  But then again one thing remains the same.  Both places have people who are in need.  As Dr. Samuel said a number of times - just living in a beautiful affluent place like Switzerland does not mean that everyone is mentally healthy.  In fact the mental morbidity is probably the same in Switzerland and urban India!  And just putting a person in a beautiful room does not make the person well (though it no doubt is better than putting a person into a dungeon like prison cell).

Which is why Dr. Samuel was with us.

To help us understand both the breadth and depth of mental illness around us - as well as to look at ways we can make a difference - especially using our Christian faith and praxis. 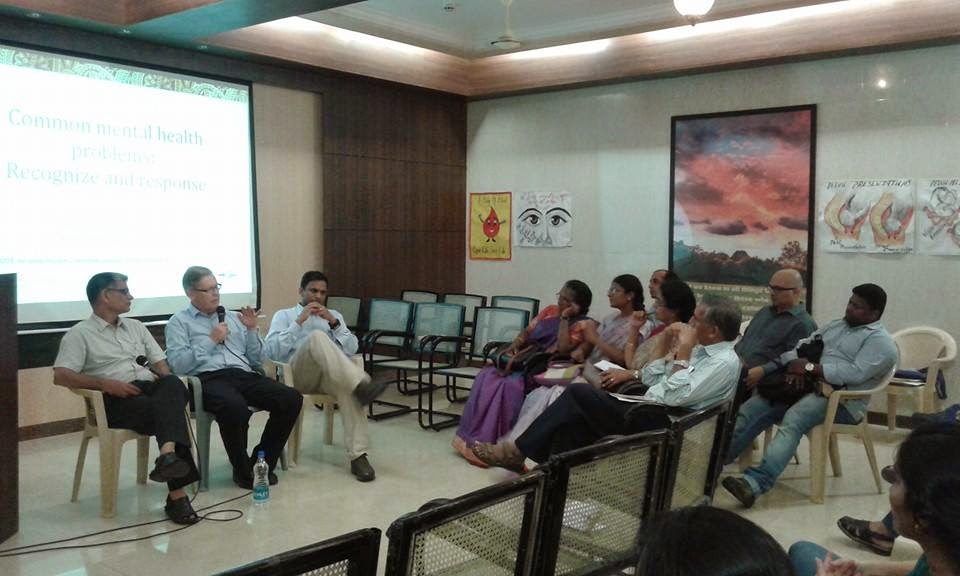 The conference was wonderfully attended with the lower-basement of the Bethany hospital full.  A good 100 plus folks in the room as the day spun by.   We were blessed to have Dr. Samuel as the main speaker - and also have Dr. Raja Paulraj from Mussoorie share and Dr. John K. John from the Biblical Counselling and Training Institute in Delhi chip in as well.

Some of the take-homes were:

Take home No. 1:  There is a lot of mental illness in India.  And we still are so afraid to even call it by its name.

Here is a video that our colleagues at Emmanuel Hospital Association have made on mental health in India.

Take home number 2 - that at the base of any and every mental health intervention has to be compassion.   This is what Jesus had - and what so few of us exhibit.  This is why we want to hide away the mentally unstable - why we wish that 'others' will do the work.  Why we want to send the folks we know who are suffering from mental illness far away.

But at the same time, it is precisely the knowlege that a person is loved and accepted - despite the challenges that they are going through - which is most important.   We see this in Jesus - His ability to accept and bring into his group people who were clearly misfits in other contexts.  Revolutionaries, cranks, folks who had gone through demonic possession...

Take home number 3 - the most important part of healing of the mind has to take place in a caring community.   Mental illness is just not something that will disappear if you close your eyes and hope it goes away.   In fact, many of us who suffer with various levels of mental illness may never achieve the 'normalcy' that everyone wants.  Even after therapy and treatment.

And here is where the caring community has to come in.   We need to care and love, even if the person does not meet up to the standards that people have for what is considered 'normal' and 'desired.'   A person is precious even if they do not fit in as we all would like to.  This is where the Church has to play its role.  Dr. Samuel pointed out that in many cases of adult onset scizophrenia, the person who has undergone treatment can not just 'go back to work.'  They will need to have some kind of activity that is less stressful and demanding than what they may have done before - while at the same time being loved and affirmed for who they are.

Who is able to do this?  Not surprisingly, the majority of places who offer such support for people who are dealing with scizophrenia in Switzerland are linked with church groups.

So where do we go from here?

Well, one thing we know is that the challenge of mental health in our country is only growing.

Unsurprisingly, I got a call from a colleague of ours yesterday.  She has a sister who is being treated for scizophrenia.  Do we know of any place where she could live for longer term?

I don't.  The 1450 inmates of Thane Mental Hospital is obviously not the place to send this lady.   I asked the woman whether her church could start a small set up where her sister could stay, maybe with one or two others who are going through the same situation - and with the supervision of a person from the church.  "That is impossible" said our colleague.

One of the things that we heard from Dr. Raja Paulraj is for the need of community mental care.   Most of the care needed is not of the acute hospitalisation kind - but of steady, loving support and caring supervision of long-term treatment.

One of the things our work brings us in contact with is mental illness.

We see so much of it that we almost don't recognise it.

Someone has said that just receiving an HIV positive diagnosis is itself equivalent of a mental illness episode.

Most of our friends who are HIV positive have gone through - or are going through depression.  All have had suicidal thoughts at some time.  Some have made steps to act on them (thankfully only few actually went through with their plans - and some of these were saved too).

But each person is precious.  Would that we will be able to sensitively and joyously help move all of us who need healing of the mind forward into the fullness of what God wants of us.  We need our psychiatrists for certain portions of this journey, but we need so much more - men and women who will care for the weak, shelter the timid, provide structure for the unruly, be patient with everyone (cf 1 Thes. 5.14).   We need a compassionate heart that puts love into action.  And we cannot do this alone - we need each other as a body.  To laugh and to cry and to pray and to continue to care and value even when it is hard and inconvenient and everything in us cries out to care for ourselves... but that is just where the love of God kicks in the strongest.

The writer of Hebrews signs off the book by exhorting us at the beginning of the 13th chapter to 'remember those in prison as if you were with them in prison, and those who are mistreated as if you yourselves are suffering' (Heb 13.3).

This is especially true for all who are living through mental illness.  If you have already experienced it - well you know that often dark road.  If you have not, then it's time to open your eyes and heart and experience the empathy and compassion that Jesus had.   And to love our neighbours (even those who are struggling with mental illness) as we want ourselves to be loved.

Posted by Andi and Sheba Eicher at 00:30