We have four very sick people tonight at JSK.

And for once Sheba doesn't have to go to do a night round.  Instead she is sitting with Asha and going over her physics.

Our sick friends are on the mend.  As much as we can expect.  And more.

Each one a 'basket-case' in the eyes of others. 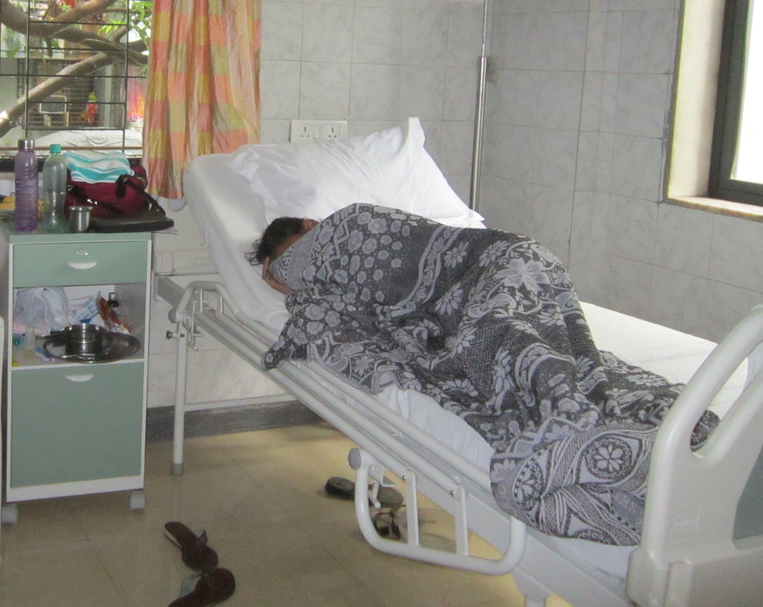 'Balram' (all names changed of course), had been in a top hospital for almost 3 months.  He was brought in a coma and has a hospital file the thickness of a novel.  How much his family would have paid for all that hospitalisation...

Balram has had a tracheotomy - and today we had an ENT specialist in to take a look at it.   We have looked after Balram for a week now at the centre.  His brother, father and wife have lovingly cared for him. Over the last few days he has started responding a bit, but still is in a state which no-one wants to be in.

We are prepping the family to take him home.  That is what the big hospital doctors told them too - but the difference is that we have been able to see some small but real improvements in his quality of life.  The love and care he has received has built confidence in the family too.  We know that they want to see Balram walk out.  That may not happen - but we want them to be able to care for him without having to always be in a hospital setting.

In another room is a man who came in gasping.  Prakash's oxygen saturation levels were disasterously low.  He was dying for lack of air - his damaged lungs and the pneumonia he was suffering from.  Our indefatiguable Anil Edwards had got him admitted at JSK on a late night last week.  We thought it likely that that Prakash would not wake to see the light of the next day.

But wake he did.  And every day since.  And miracle of miracles - after going through 2 bottles of oxygen a day - Prakash can now breath... I was about to say normally.  Not quite normally, but at least without O2 assistance.

Kamala is painfully, horribly thin.   When we first met her she weighed a pitiful 19 kgs.  Has she gained weight?   What she has gained is a smile.  A beaming smile from her emaciated face.  She comes to the morning devotion in she sweater, barely able to walk on her own, her TB mask in place and her eyes shining above it.

Is Kamala a saint?  Well, let's say she is not the easiest person to serve.  The folks from the church who are taking turns every day to care for Kamala are finding this out.  She has her moods.  She demands things.  But serve they do - in the simple humble way they can.  They are learning, however, that love does not always mean giving things that are demanded.

How long will Kamala continue with us?  We are prepping her and the church folks to take her home.  She has been started on her TB meds.  She has at least a small appetite.  She has been blessed with prayer.

Venkat couldn't walk when he came.  His teenaged son is caring for him beautifully.   On the last 2 mornings he has made a short walk down the hall.  He came to prayers this morning with his urine-bag in tow.

What a privilege to be a small part of these lives.

Each person who gets admitted has their own stories.  Their own issues.  And these are shared at various levels with their care-givers and others.   Those with strong family / social ties clearly get better quicker - live longer - survive more bitter dips than others.

But even getting admitted is a challenge.  We had a lady come today with a pleural effusion.  Her mother was lecturing our doctors that they did not tap her daughter on the right side.  We wanted to admit her, but had to send her away because of the complex set of demands that cropped up.  Alas, caring is not always simple.

Can you hear His footsteps closing in?  He is found among the poor and broken, the complex and torn.  He walks the faeces-smeared streets under dim puddles of light, looking for the dawn.

He gathers the basket-cases - and makes something beautiful.