We have had some wonderful visitors recently. 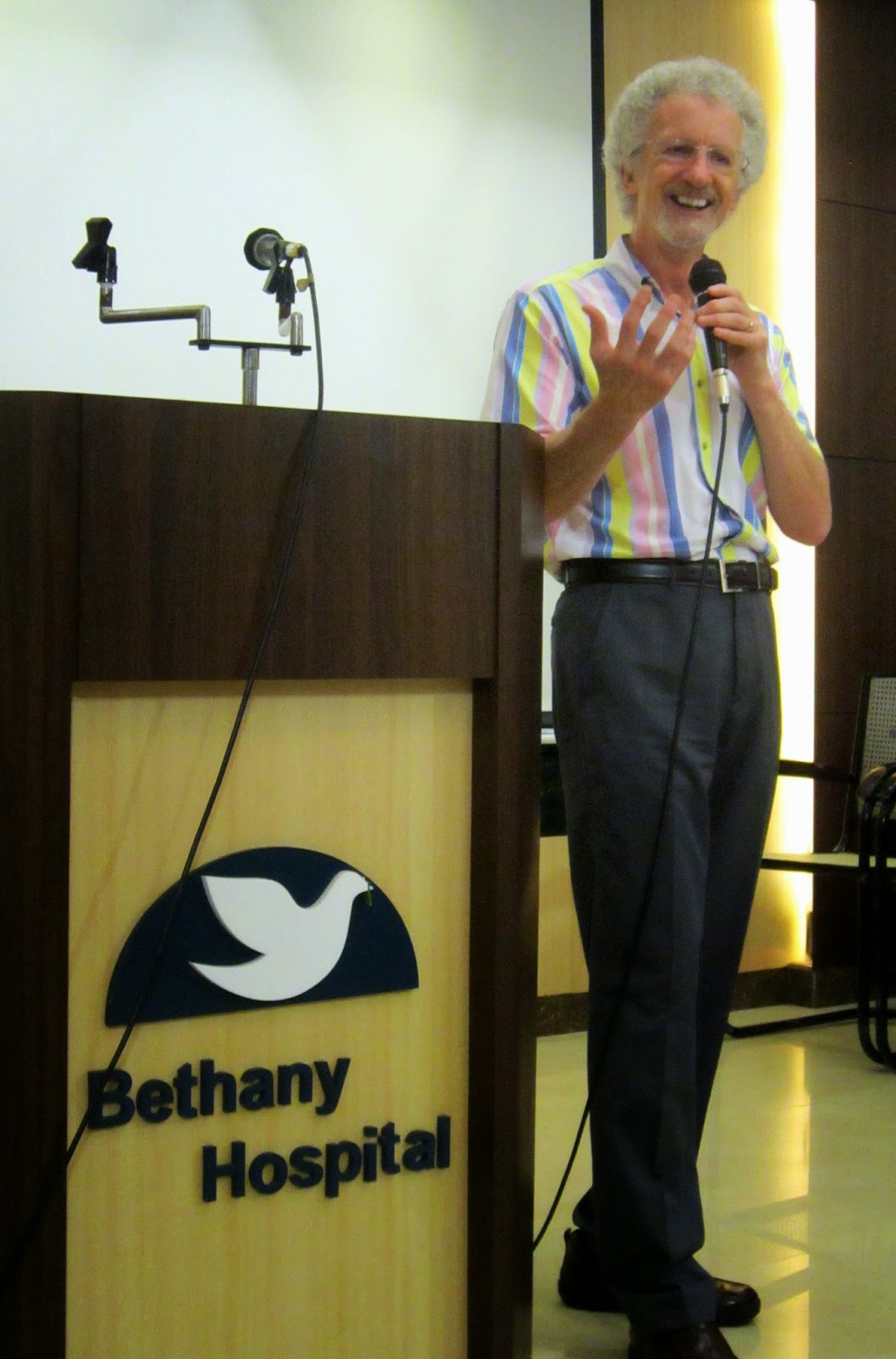 Yesterday night and today Philip and Janet Yancey were in town.

Philip shared last night at the Bethany Hospital on the issue of pain - 'the question that will never go away.' Drawing from his latest book, Philip shared about meeting people who had seen the Tsunami sweep everything away in Japan - and recognised who had come to help them and bless them.  He reflected on the terrible carnage of Sarajevo, where for years people had mortars raining down on them - and yet where a sense of solidarity in sorrow pulled people through.  And finally he shared about the impossible task given to him to talk to parents and others who were grieving the loss of 6 and 7 year old children from the Newtown primary school shooting.

For a man who has spent his life thinking about suffering - Philip is a wonderfully empathetic and positive person.  An irenic questioner, he started out with out his talk by telling about a man who was to go on the mission field but was struck down with polio.  And how some Christians thought that he was healed - and so had him taken off his 'iron lung' and discharged against medical advice so that they could show that God had healed him.  The man died a week later.  He was Philip Yancey's father. 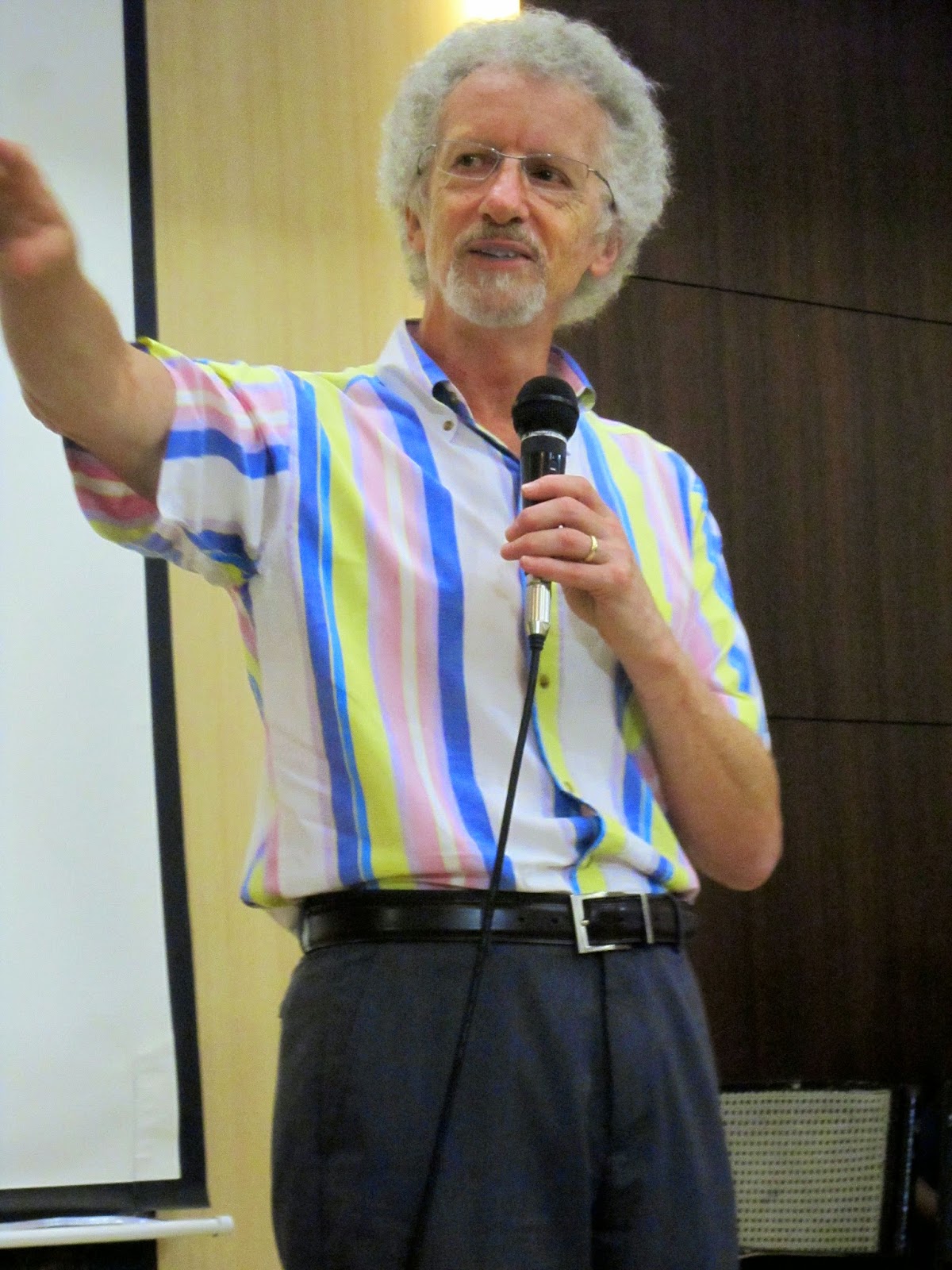 Ultimately Philip hones in on God's identifying with us in suffering through Himself having suffered and crying with us in our pain - the wounded healer of Jesus.  When we follow our Lord and share in the sufferings of others, that real healing can take place.  No short cuts. No easy answers.  But the very presence of Jesus Himself and through His followers who serve as His hands and feet among the brokeness around us.

It's not a cooincidence that when the Newtown massacre took - no atheists were asked to give words of comfort.

The basement of Bethany was packed - and we seemed to know half the crowd - but I had to duck out quickly since our dear college mate Ken Hugoniot had to catch his flight to Hong Kong (more on Ken's visit in the next post - stay tuned).

This morning I picked up Philip and Janet in our papaya.

During the short trip to the JSK centre we were already deep in conversation.

We had 2 hours of the Yanceys at our disposal, and we squeezed out every last minute of it!

Janet - an amazing effervescent lady who reads our JSK prayer letter religiously and along with Philip prays for us regularly - introduced herself and her husband - and said that she would allow her husband to speak first.

Philip focussed on the word 'advocate.'   He talked about it coming from the Latin words which mean to 'give voice.'   It's not by chance that God is called our advocate repeatedly through scripture.  A God who cares for the orphan and the widow.  A God who touched people with leprosy.  A God who was even thought (erroneously) by people in the middle ages to have suffered leprosy himself.  One spin-off of this thought being the establishment of numerous centres to care for people with 'the holy disease.'  And a long history of Christ-followers who cared for people with Hansens disease - esp. when others hated them - including the man Philip was deeply linked with: Dr. Paul Brand.

Philip then talked about how we at Jeevan Sahara are giving voice to people whom others cast aside.  He thanked our staff for what they do and talked about how he and Janet had been following our progress since the time when they had visited JSK 8 years ago.  Those were dark days - as it was when the Pakistani terrorists were slaying people in the Taj Mahal hotel.  But here were Philip and Janet again - looking much the same - with his gentle whistful smile and her beaming overflowing with hugs personality perfectly counterfoiling each other.

As if to illustrate Philip's point about being voices for those who are not heard - Peter and Anil - two of our staff slipped out as they had a meeting along with other civil society representatives with the head of the Maharashtra AIDS Control Society about the lack of ART medicines in several key hospitals - with patients told curtly by govt. doctors to go and buy them on their own.   Another example of speaking up. 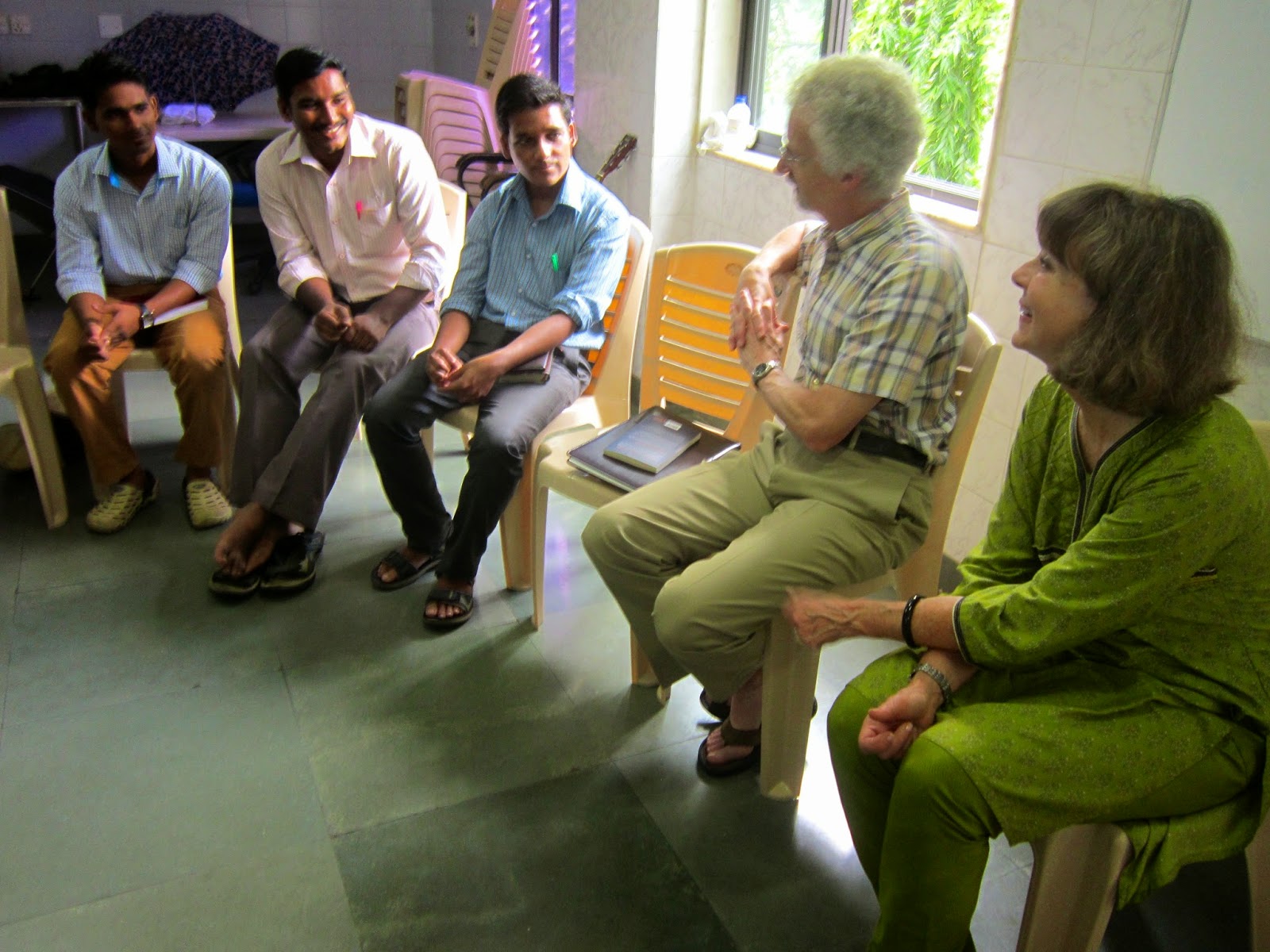 Janet then took over, sharing about how she and her husband had lived over the years - and how their being so different in nature and temprament had served them so well.  A 'retired' social worker, she talked about the importance of caring for ourselves as we care for others with the love of Christ.

We could just not stop laughing as this lady beamed sunshine into our hearts.

We then went around the room - with each one sharing what brought them joy in their service at JSK.  We were joined by two of our Positive Friends who shared some of their story - and a church volunteer and a prayer supporter who told their stories too.

We were joined by Mrs. Washim - a lady whose  home Philip and Janet had visited 8 years ago.  They were thrilled to see how healthy she looked and how much she is involved in her local church.  Janet remembered the tiny spick-and-span kitchen Mrs. Washim kept.   Hugs were exchanged and prayers prayed.  How the two hours slipped by we will never know - but 11 o'clock arrived what seemed a flash. 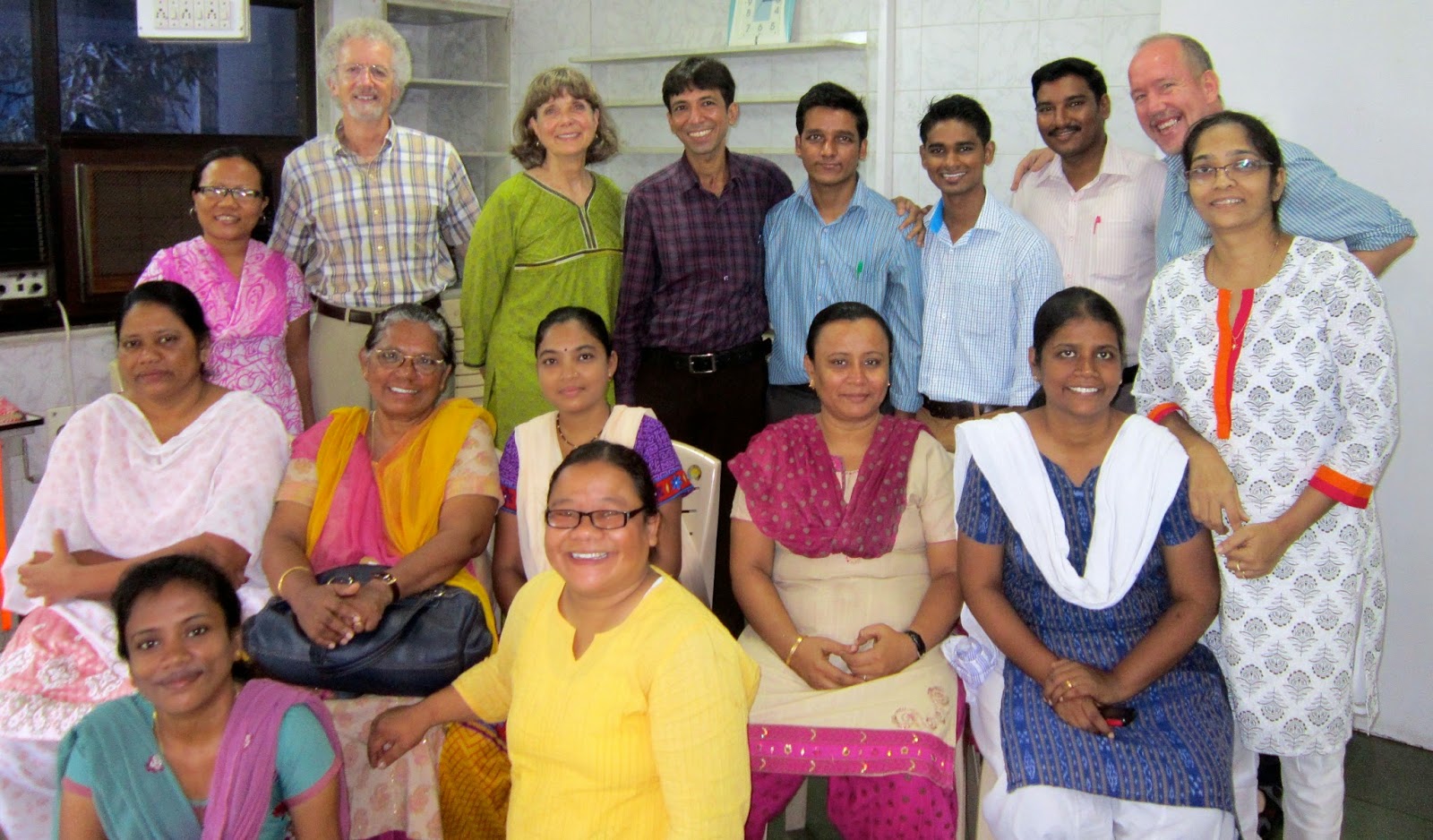 Just time to squeeze in a little tour of the JSK centre at Lok Hospital - a far cry from our old JSK office where the Yanceys came last time.

At the end of our time we stopped in the room of Mr. Rahul (pseudonym of course) - a man who is very sick.  He talked about how much love he received from the nurses and doctors.  And how much he wanted to get better but that his feet were so weak and he was in such pain.  Tears joined his words as Rahul spoke out his pain.  And gratitude for our staff Anil who had met him in his home and brought him for treatment - and for the doctors and nurses who spent time with him.  And hope that he will get better.  We placed hands on him and Philip prayed for Rahul's healing and comfort. 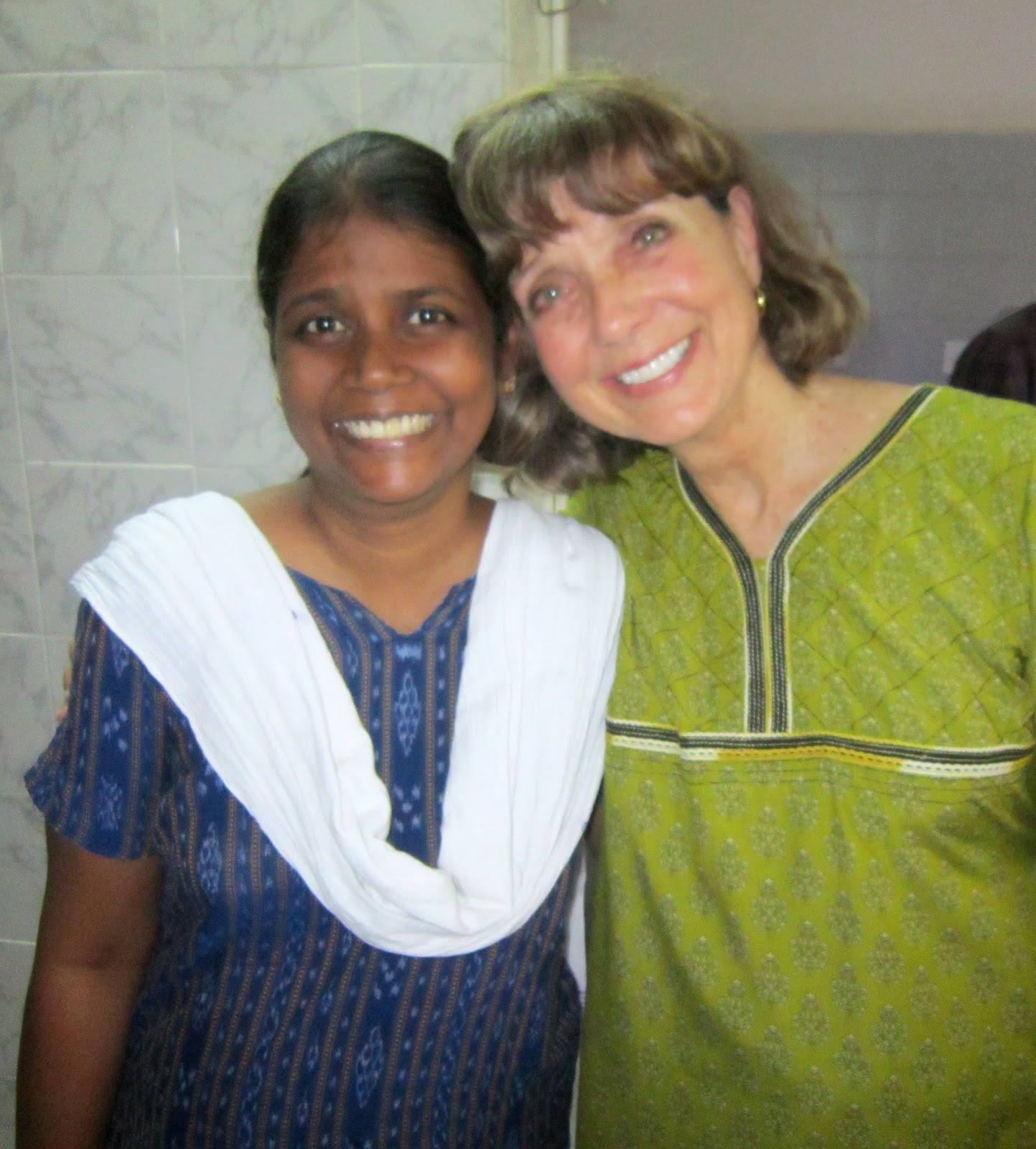 It's been a good day.

We are going through some deep waters, seeking clarity and guidance about how to move the Jeevan Sahara movement forward.  Costs are a big factor at this point.

But together with our friends Philip and Janet we celebrated what God has done.  He uses ordinary, simple people who love in His name, love as He loves others.

Are we 'giving a voice' as Philip reminded us this morning?  We hope so.  We belive so.  We want to be even more so.

Philip and Janet are travelling on to Vellore where he will be delivering an oration in memorial of Dr. Paul Brand's 100 birth anniversary.   Bon voyage friends!  May you continue to give voices to others!
Posted by Andi and Sheba Eicher at 21:17