One of the many things our dear friend John Forbes did when he visited us 2 weeks ago was to squeeze in a small visit to one of our most challenging Positive Friends.

Bali (as we will call him) lives in a shack on the side of the road just 100 meters from the JSK clinic. Its a pitiful contraption of old boards banged together - abutting a tree that juts out into the road. 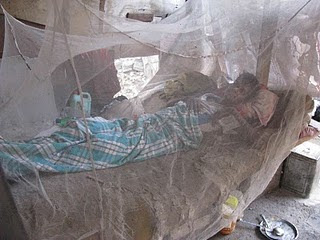 The last few years seem to have been spent in a haze of alcohol. And that has been our experience with him for most of the 4 months that our JSK team has been ministering to him. Either he is drunk. Or his brother. Or his mother. Or all three.

Having HIV in this situation is not easy. We found out that Bali was suffering from TB too. The govt. health authorities initially balked at our request that he be started on anti-TB meds. But our staff persuaded. And so we were given his box of meds to give him every other day.

Our staff have gone the extra mile with Bali. And then some.

Given the chaotic situation in his 'house' it is not surprising that Bali has hardly been eating. TB robs people of their appetite. And Bali's mother and brother hardly brought food. Instead they repeatedly cursed him. Bali was weak and bed-ridden. We looked into possibilities for putting him in an institution - but nothing opened up.

Our staff and different volunteers kept meeting Bali. They spent time with him. They cooked food and brought it to him. They prayed and encouraged him. They listened and agonised about how best to help. Despite the food our staff has been giving Bali's weight was going down. Did he have malaria? The shack had a cloud of mosquitos. The bed was filthy. Bali had not had a bath... since when?

Each day brought a new distressing report. What were we going to do. It all seemed pretty hopeless.

Early last week we decided to take him into the JSK Clinic as a day patient. Forget about his mother and brother's 'help' - we would try and do what we could.

Peter went to tell him about being admitted during the day. Bali refused. "What will I do there all day? And after that? I have to come back here. I am better here."

Those were the words spoken by Bali.

But what he was really saying is: "I am tired of all of this and don't want to carry on." The voice was his but the words were his depression and hopelessness speaking.

We persevered. That afternoon Peter went again. The next morning a small team went and put Bali in a wheel-chair and brought him to the centre. Giri gave him a haircut and a bath. A set of clean clothes on, Bali was admitted for the day. Our staff continued to talk with him. At the end of the day he was wheeled back to the shack.

Over the past week we are seeing a different Bali.

There are still challenges, but he has opened up.

He told Sheba about a childhood experience where he was rounded up on the suspicion of being a thief. He was placed in a 'remand' home and beaten so badly, that when he was finally released he vowed to fulfill what he had been accused of.

Bali told Sheba about the constant abuse that he got from his mother and brother. She prayed with him. Amazingly the last 3 days of the week went by without him being cursed by his near (and dear?).

Bali looks a different person now. But he still has HIV. His TB status is now sputum negative (big cheer!). But he still has many challenges - and is still immobile in his shack. He does have hope in Jesus. He has not touched the bottle for some time now. He has made some steps forward in his life.

The complexities of this man's life are a small picture of the teeming whirlpool of people who eddy through our vast grimy cityscapes. Each has so many stories. Most of them locked down under layers and layers of sadness. Or boisterous street-smart mannerisms.

We are far from the end of Bali's quest. We have been through some deep waters with him over the past month. But after a long time we do see some light instead of only darkness.
Posted by Andi and Sheba Eicher at 13:45