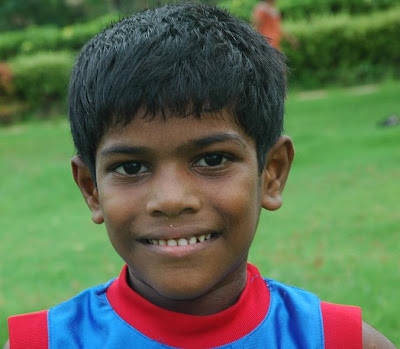 This just in from our dear friends Bennet and Bernie David who run an amazing group called "Tender Hands":

We really need your prayers for one of our boys, Akash.

Two of our boys were on time-outs most of yesterday, which is nothing new for these two guys who are constantly mischievous. Apparently one of them has been planning to run away for about 2 weeks and finally he found a companion, Raju to go with him. So at about 3-4 am, Raju and Akash went to the roof, scaled half the wall until they landed on the building under construction next to us and went to the train station.

Both of them are from VT train station (Victoria Terminus) and they took the first train back there. Apparently they separated on the platform, Raju left the train station but Akash must have been having to much fun riding the trains and jumped on another train. We just have no idea which train and to where. Raju left the station and was starting to roam around his familiar territory when one of the other mom's (Sara's mom) recognized him and assessed the situation pretty quick and grabbed him by the collar and tried to call Bennet. He did get away briefly but she was able to catch up and from then on, scooped him under her arm until his father was able to get there. So, Raju is back at home but has no idea where Akash went.

Akash's father also lives on the street at VT, we got a hold of him and he went to the police but because he is poor, illiterate and living on the street, the cops would not help him. They didn't want to file a report because then they may have to work a case. Bennet's brother, Melwyn works near by and was able to rush over there and file the police report and get it in the system. Apparently if he is found at a train station, we will know it as he is in the system. His father and his friends, as well as several other people are walking the trains and stations looking for him. It is a pretty tight knit community of the people living on the street and they are all looking for him. Joy is also searching for him.

At this point, in a city of 18 million people, looking for a 8 yr old boy is pretty much a miracle ! Please pray that the Lord will send his angels to protect him where ever he is tonight and that tomorrow someone will help him to get back to us in safely and unharmed. Pray that he does not end up on one of the outbound long distance trains that would take him anywhere in India.

Please pray for a big miracle, we serve a God that can move mountains and He knows right where Akash is tonight. Please Lord wrap your arms around him and bring him back to us !!

Bernie David
Posted by Andi and Sheba Eicher at 08:40

We would love to talk with you.