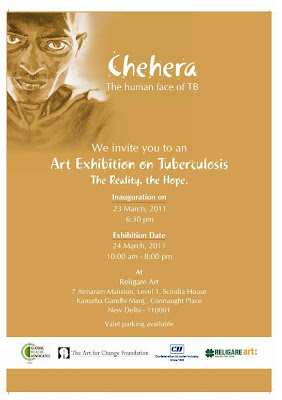 This week marks World Tuberculosis Day. March 24th. Not a happy anniversary at all. But a day when some folks around the world pause to think about the progress in fighting a disease which continues to squeeze the life out of so many.

We need a vaccine. There are a few hopeful signs on the horizon. A recent article quoting our old friend Dr. P.D.O. Davies of TB Alert says that a vaccine target molecule shows promise - but that even in the best case a workable vaccine is still a decade away. We have meds that can cure TB. We have a free public distribution which does a reasonable job (at least in the cities like Thane). But we still have thousands who die of TB in our country every day.

Stefan and the Art for Change Foundation have been running "Creative Conscience" weeks where artists get together and do art. Together. Its an annual gathering where they live in community and fellowship and think and talk and create - along a common theme.

Late last year they did one on Tuberculosis. The artists gathered for a week and met TB patients at one of the largest TB hospitals in the world. Stefan worked hard to move the artists from a simple 'poster' based responses to ones with more bite and depth. One result of getting into the lives of these men and women were a series of paintings. Challenging - life-changing paintings. The other result were artists whose outlook had become all the richer - and more challenged.

The result of this week is an exhibition that opens in Delhi this week. Together with Global Development Associates and the Confederation of Indian Industry - the show will be at the Religare Art Gallery at Connaught Place. You can't get more central than that.

Our hope and prayer is that this set of paintings will indeed prick the conscience. Of whom? Both the industrial jet-set as well as the man on the street. The movers-and-shakers as well as the common man (or woman).

World TB day rolls round once a year. The other 364 days need people to uncover the hidden plight of so many. Especially in our vast and often contradictory country of India which has the dubious distinction of the largest number of people with TB and the largest numbers of TB deaths each year. May the brush join the microscope and the pill in being wielded by committed hands to fight an ancient disease which continues to wreak so much havoc.
Posted by Andi and Sheba Eicher at 23:38