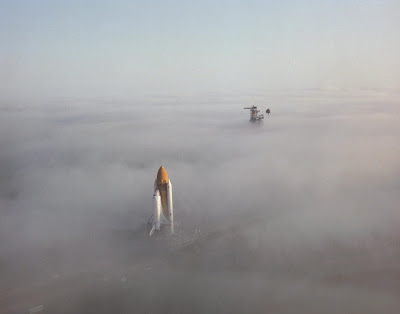 Technology will save the day.

In the late 70s I spent a vacation voraciously reading old copies of Popular Science magazines from the 60s. They had articles telling about what would happen in the future - complete with illustrations of planetary colonization and various other utopias.

Technology - and specifically space travel for humans - was going to make it all possible.

As a kid I keenly followed the 'space shuttle' programme - delighted at the idea of a craft that would go up on a rocket - circle the earth - and then return penetrating the atmosphere before gliding to a landing on earth.

All that changed 25 years ago. The space shuttle "Challenger" exploded. A 'routine' launch on a clear day - watched by millions. Seven astronauts obliterated in the eerie silence and white vapour and smoke 73 seconds after their craft had left the earth. 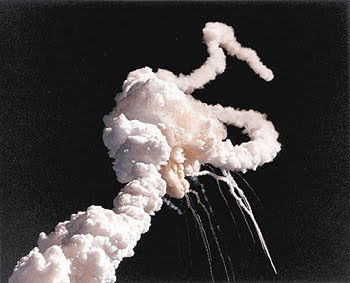 I was not one of those who saw the unexpected horror on TV - but the pictures made their way out to my 11th grade class at Woodstock School soon enough. It was particularly poignant since one of the crew members was a school teacher who had been selected for the mission through a rigorous and highly publicised selection process.

This was not supposed to happen.

We were close to the end of the cold war (how close to the collapse of the USSR was not known to us then) but the Americans with their spiffy and squeaky-clean space programme (lots of gleaming white as I recall - while the Soviets always seemed grey and grimy) were being touted as the saviours of the world.

A whole industry has emerged - with multiple theories about what went wrong in the Challenger explosion. Most focus on the infamous 'o-rings' - rubber rings whose characteristics changed at sub-freezing temperatures. The concerns of some of the engineers involved seem to have been over-ridden by the management in their desire to get the mission into space a.s.a.p.

What the accident did was to start to pull the plug on the shiny-happy optimism of space flight. The plug finally got pulled when the Space Shuttle Columbia disintegrated during reentry in 2003. To make the matter even more piognant - this mission had another charismatic lady on board - the Indian-born Kalpana Chawla - whose story had inspired millions of girls about what possibilities they could achieve.

Barring some completely game-changing space technology - I really do not see much manned-flight off our planet (even over to our own lunar satellite) in the next 50 years or so. Maybe a prestige shot by China in about 20 years from now - but little else. The costs seem to high - both in terms of the sheer massiveness of the whole endeavour - as well as the human costs. After losing 14 astronauts in the two shuttle disasters - the Americans and others have busily sent robotic vehicles into space - and that is where I think it will remain for the next half century at least.

Pity. At the base of it all is the romance of thinking of leaving this planet and moving somewhere else.

Technology was supposed to take us there. Something got 'bugged-up' along the way.

A quarter century ago an almost beautiful plume of white vapour on a clear blue sky marked an end of a certain kind of wide-eyed-innocence.

Our dear planet earth. Looks like we are going to be here for a lot longer than some had hoped.
Posted by Andi and Sheba Eicher at 01:07