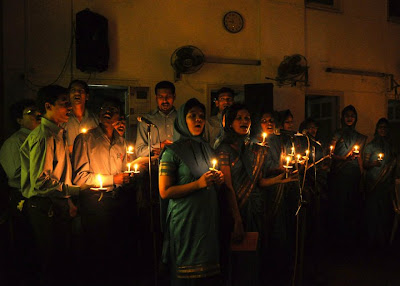 World AIDS Day came and went. Or did it?

Internationally December 1 has been chosen as a time when people around the world focus on the needs and issues that people living with HIV/AIDS.

Its been going on for years in some places. Each year sees various levels of participation. Last year's effort seemed one of the more quiet ones for us in the Mumbai area.

But we did have a fabulous Mumbai AIDS Sunday get-together in Mulund.

Hosted at the Marthoma Church in Mulund - we were blessed with a challenging time of remembrance and challenge.

Earlier in the day I had twice given short messages in the morning masses of the St. Pius Church and met with the confirmation class after mass. Local volunteers had handed out 3000 red ribbons to parishioners and we had manned a book table too. I then joined our own local house-fellowship where we had a special time of prayer for people with HIV - as did a number of other church groups across the city.

Among the many highlights of the evening time were two courageous couples who stood up in front of everyone and shared their stories. They told about what it was like to have HIV. They shared their bitter experiences - and also how they found help in followers of Jesus from local churches who had helped them - and how Jesus himself had heard their prayers.

We did not hear a simple I-was-in-total-trouble-then-I-met-Jesus-now-everything-is-great kind of sharing. We heard real people telling their stories. Stories that are still being lived out. But ones where real hope is breaking through. It was a revelation. 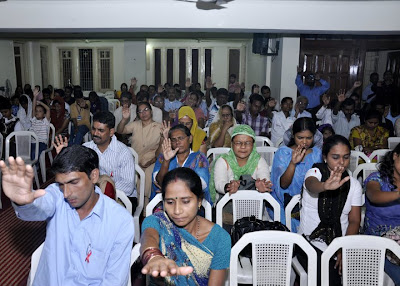 Afterwards everyone present stretched out their hands to pray for these amazing ones. It was something that we have always wanted - to have people living with HIV tell their stories. And here it was happening...

At the same time it still is sad that we have to have meetings like this. In 2011 we now have been living with HIV in our country for the last 25 years. I still remember talking with Dr. Symon Satow in his home in Mussoorie about the initial spread of the disease in 1986 - when papers were full of statements calling it an 'African disease' or a 'Western malady.' We do have a grudging acknowledgment that our dear country also is going through the challenges of HIV - but there is such a dearth of compassion and care.

Having said that - we face a poverty of compassion for so many issues that lurk beneath the surface - the needs of the (many) mentally ill - the challenges of domestic violence - the sheer callousness of so much of what we call 'society.' One of the age-old remedies most of us take is just to switch off and tune out anything that is uncomfortable to us.

So what do we do? Give in? Hardly.

And use humour too - because we can tend to be pretty dry at times.

One of our favourite plays (which the JSK team enacted on Dec. 5th) is a pastiche of different folks who react to a person with HIV. The character who usually brings the house down is the politician (here played by our staff Shanti Francis). 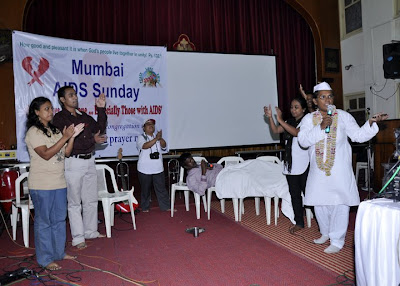 Barging in to the home of a person with HIV - the 'Neta' promises the earth, moon and stars - with appreciative followers and journalists applauding her every statement - and then quickly moves away when she finds out the chap with HIV supports another party.

The final message is that we need to keep talking.

HIV is a disease that thrives in silence.

Speaking out makes a difference. Our voices maybe small. Our audiences may not be massive. Our words maybe misunderstood at times. But every bit helps.

One thought: every word we say continues to exist in the mind of God.

Lets keep talking.
Posted by Andi and Sheba Eicher at 19:43