From somewhere in my childhood memories an image emerges.

We were visiting Britain in what must have been 1977 or so. We had come into someone's home. It had a staircase. With a bannister. And down the staircase came... the most enourmous cat I had ever seen.

It just wobbled down the stairs - its huge belly and thick fur causing my jaw to drop. Having only seen the scrawny fellows of my Mumbai boyhood this was a revelation. A cat Goliath.

That cat came to mind sometime ago on reading an article in the Indian Express. The beauty of my favourite morning paper is that it has a page of articles from my favorite magazine - the Economist - which is priced well out of reach for me - but which I read each day for the Rs. 100 per month that I pay the paper-walla downstairs. 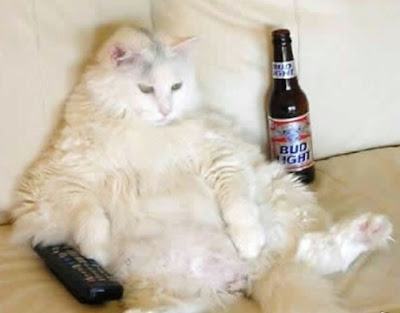 No - this cat was not the cat I remember from my childhood - and it was not from the Economist article - its just a pictoral filler!

The article reports on a study called: Canaries in the coal mine: a cross-species analysis of the plurality of obesity epidemics that tried to see if animals are becoming more obese.

Of the 24 different populations (a total of 20,000 animal records) of 8 species - 11 populations showed significant increases in weight - and all populations showed some increase - which itself is a significant finding. Cats, dogs, rats, some kinds of monkeys were animals for which data was found over decades. Some were in laboratory settings - others were living in homes. All got fatter.

The easy thought that comes to mind is - people are eating more - and feeding their pets more - hence fatter animals!

But here is the strange bit. Laboratory animals (which form a big proportion of the populations studied) also gained weight. Their food is standard. Their amounts are not increased. They can eat as much as they want - whenever they want. Why are their weights going up?

Why indeed. As if there weren't enough unanswered questions about life, the world and the universe (and for us in India the price of onions) here is another to ponder on feverishly on nights when you can't sleep: why are laboratory animals getting fatter?

Chew on that a bit my friends!
Posted by Andi and Sheba Eicher at 18:25