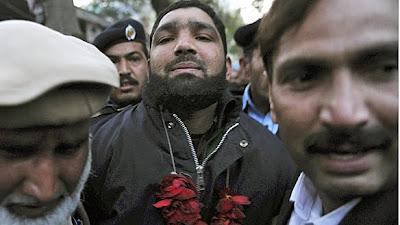 Sometimes you wonder whether anything can still shock you. And then something does.

This week Salman Taseer - the governor of the Pakistani province of Punjab - was assassinated. Following what seems to now becoming a tradition in South Asia - it was one of his own body-guards who pumped the 20 bullets into the prominent Pakistani politician.

So far, so shocking? Well, we have seen this before in our neighbourhood.

Now here is the rub. Ghazi Mumtaz Qadri - the guard who shot Taseer - was not stopped in any manner by his fellow guards. After Qadri was arrested and he was garlanded with roses. Lawyers showered rose petals on him when he appeared in court yesterday. The look on his face in the photo above tells the whole story.

Pity poor Pakistan. A nation that some would say was founded as 'not-India' seems to be sliding ever more into the depths of violence and anarchy. This is not happening on the bad-land frontier anymore - this is at the heart of power. We are not talking borderland Rawalpindi - we are looking at the Punjabi heartland. But beyond the henious act itself - the make-your-hair-stand-up fact is that Qadri seems to be receiving a ground-swell of popular acclaim instead of revulsion.

What was the main reason Taseer's bodyguard shot him? Qadri apparently told his interrogators that it was because of Taseer's opposition to Pakistan's blasphemy laws. Taseer was perhaps the most prominent Pakistani politician to stand up for the rights of Asia Bibi - a woman accused of blasphemy and sentenced to death under the Zia-era blasphemy laws.

The statements of Pakistani religious leaders after the murder makes chilling reading:

"The supporter is as equally guilty as one who committed blasphemy," the group warned in a statement, adding politicians, the media and others should learn "a lesson from the exemplary death."

It is a crying shame to see what is happening on the other side of the border. As neighbours this is the last thing that we would like to see take place. India needs a stable Pakistan - just as Pakistan needs a stable India.

We in India are so blessed to have had 15 national elections in a row where power has been handed over peacefully. We are blessed with an army that stays in the barracks and does not meddle with power. Though our press has its own weaknesses - we are by and large blessed with a variety of opinions on different subjects - and ones where the high and mighty of the land do have to take note of.

Zulfikar Ali Bhutto - the former prime minister of Pakistan who was hanged by General Zia - was an 'old boy' of my first school in Mumbai - the Cathedral and John Connon School. I still remember as a 5th standard boy - standing in Mrs. Mahableshwarwalla's class for a minute of silence when the news of Bhutto's was announced.

How terribly sad that instead of fewer such events from across the border we now have newspaper images of assassins being garlanded and feted - and see videos of Qadri singing hymns from inside police custody filmed and published on youtube by what can only be sympathetic security forces.

We prayed tonight for Pakistan. There were only two of us at our weekly 'men's prayer' time, but we prayed for true justice and peace to take root in our neighbouring land.
Posted by Andi and Sheba Eicher at 00:12