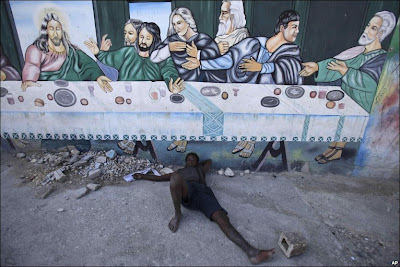 I'm usually not much of a fan of Jesus Christ paintings. Its not that I am against any painting about my Lord. My main issue is that he is normally shown as some European chap wearing colourful robes - spotlessly clean and surrounded by hair-permed chaps in their own robe-sets.

But here is an interesting thought - has the size of a meal changed over time?

Well the boffins are at it again! They looked at a series of 'last supper' paintings from AD 1000 to about AD 1700 and measured all manner of things. The goodly chaps then compared the size of the bread with the size of the head! They found that both bread and plate sizes increased as time went on.

And hence the cry goes up: "beware of the large serving of food!"

Ah the marvels of technology.

It does not surprise me is a whit that there has been a 2/3 increase in the size of food served over a thousand years. The futility of the study is shown in its endpoint. Why stop at 1700s. The industrial revolution - and the availability of food crops on a massive scale has totally revolutionised how much food we have.

Muriel Elmer once taught us that after the 2nd world war, school benches in Japan had to be changed 3 times - because the average size of a young Japanese was increasing so much. And we are not talking just of girth - but of overall bodily stature.

So much of what we talk about certain 'ethnicities' being small (just think of the British Raj project of classifying the different 'castes' in India) may have much more to do with not having sufficient calorific intake - and that too for generations - than some inherent genetic basis. If my mother has a small pelvis (and she does - I was a very difficult birth) - it is probably because her mother had one and she as an infant was not able to develop as 'large' as she could.

So what about the last supper paintings? Well - for one it would be interesting to note changes in average bone size over centuries - and then compare that with the post world war II era. I am not a betting man, but were I, I would wager that for the so-called 'industrialised countries' the change in the last 60 years has been greater than the past 1000!

Its interesting to note that the picture (shamelessly swiped from the BBC website as usual) has some pretty small looking pieces of bread - perhaps a reflection of the Haitian condition where it was painted? In fact comparing the amount of 'bread' to the amount of 'wine' - it looks like a pretty liquid dinner for all!

Its also interesting to note that Jesus and all his disciples would have immediately left the room if the bread as shown in all the 'classical' Last Supper paintings was served. Today being the Passover feast - which was what Jesus and his followers were eating - they would not have eaten anything with yeast - considered a picture of impurity. The 'bread' present would have been our 'chapatis' and not the 'buns' that western religious artists litter the Last Supper pics with!

Posted by Andi and Sheba Eicher at 11:20