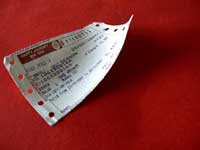 He works as a clerk at a local railway station.

I see him sometimes - he normally asks me to come back and jump the queue. I have escaped this most of the time - though he got me once to come back.

He is HIV positive and lives out in the hinterland - commuting in on the same railway he works for.

He and his wife have not had it easy - made worse by his drinking and the mental imbalance. But somehow he has held on to his job. His HIV medications and his psychiatric treatment have carried on over the last few years. He has hardly been the considerate husband. Their 11 year old daughter has seen and heard many, many, many fights.

And now the HIV meds don't seem to be working much. His virus seems to be resistant to them. His most recent CD4 count is a paltry 44. He basically does not have an immune defence at this point.

He still comes to work. We are trying to get him onto the next line of anti-retroviral therapy. The govt. hospital in Mumbai which dispenses this has a constant demand for the therapy - which is about 5 times as expensive as the first line meds.

No easy solution for this couple.