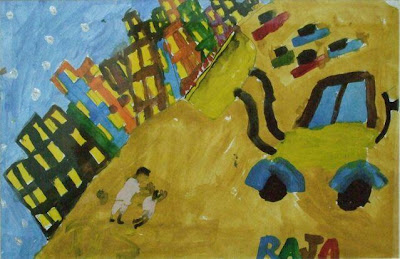 She was lying on the sidewalk. Perpendicular. It was 6 in the evening. Was she asleep? In another world?

This morning our staff had taken her child. Taken the child to an orphanage. We had previously taken both mother and child to an amazing home for destitute women and children. Sadly she ended up stealing, disrupting the work there - causing 8 other women to leave - before she finally persuaded a young woman to leave with her - and ended back here on the sidewalk.

For the past month she has been here. She acts mad - but is not. She is clearly sick in the head and heart - and very broken in many many ways - but she is not out of control. Her behaviour has a certain logic. Part of it is to keep men from abusing her. Her filthy unkempt appearance was so dramatically different from her beautiful child - and the toys that local appartment dwellers gave the little 1 year old girl. At one point she said that a local shop keeper was allowing them to sleep in his shop at night. But we have seen her out on the street too often for that story to be true.

A few days ago she said that she keeps waking up all through the night - trying to protect her child. She wants to be with the child - but knows that she cannot care for her. She said that she wanted to give it for adoption - and that someone would be taking her. But no-one did. How much of what she says is pure fantasy - and how much has shreds of reality mixed in is hard to make out.

It now turns out that she does have a husband - but that he has abandoned her. Her brother who is looking after her older boy has gone back to the village as the man he was working for died - and so he lost his job. Where the village is is hard to tell. How much truth is in it is maddeningly difficult to tease out.

Our nights have been spent in discussion and prayer about the two on the pavement near our house. How can we sleep while they are outside with the dogs. No easy answers. No easy sleep for sometime for us. Anguished cries - and more anguish about what we felt was our total helplessness in the situation.

As I said - we have already been through a lot with her. Our staff took her and then she burned bridges and came back to the pavement. We did not think there was any chance the place she left would take either of them back. But we prayed and tried again. No - was the reply. A few more days of anguish for this woman and her child. We prayed and talked with her. She said that she wanted to be with her baby - but was ready to have someone look after her. We tried again. They agreed to take the child - but not the mother. They said they would not put the child up for adoption - but would care for her until the mother was ready to take over again. She could come every 3-4 months to visit the child.

And so the heart wrenching step this morning. Mother giving up her child. Our two lady staff going by bus - on beyond Pune. Mother lying on the pavement. Perpendicular.