Take me to the moon 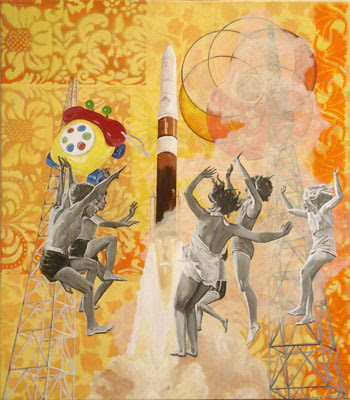 Broadcast No. 25 - by Dan Baltzer - see http://www.dBaltzer.com
We were walking down the street near where we lived 4 years ago. Asha was 2 and was being carried on my shoulders. It was evening and we could see the moon. 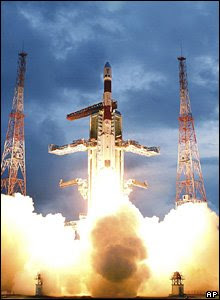 India made her first big step there today.

The Chandrayaan 1 rocket left for a date with our loving satellite and plans to drop a probe onto the very surface of our lunar neighbour.

The glory of it all got me thinking back to when I would read old Popular Science mags from the 60s that were accumulated at the Alliance Library at Akola. Space travel was so totally optimistic - and hinted at worlds unknown.

Today we see our great nation sending an indigenously crafted vehicle off into space.

At the same time, the reaction of the man in the street varies. From pride in technological achievement and a feeling that we have arrived in the world - to a question of what the whole point of the exercise is when vegetable prices are so high.

We straddle this huge continent of a country - where on a single day the lives of over a billion people is lived out in so many ways. A bomb went off in Imphal - 17 people dead - but will probably be buried in page 6 of tomorrow's paper. Our cricket team had a historic test win over Australia. A young political leader in search of a mass movement was arrested yesterday - and has brought Mumbai to a stand-still. And in the middle of all of this millions upon millions continue their day to day lives.

Hats off to the scientists. Its not a question of whether we should be building rockets or not. We clearly should. Our 60 plus years of independence have shown that poverty is not going to dissappear because we have not had plans to eradicate it. The rot on that front is a lot deeper. But it would be a crying shame if our nation were only to ruminate on the failures of the past (and present). We have too much energy, too many minds, too many opportunites - and too vast a sea of humanity to be linked into any single strand of development.

Let not only a thousand flowers bloom - but a million. Oh that we could see excellence in all areas of our lived experience, instead of the few streams that glisten (its no coincidence that our beloved ex-president Dr. Abdul Kalam was a rocket scientist).

Art for example. Below are some works in progress by Daniel Baltzer - one fo my brother's colleagues and friends. Would that we would see a thousand - no a million canvasses. 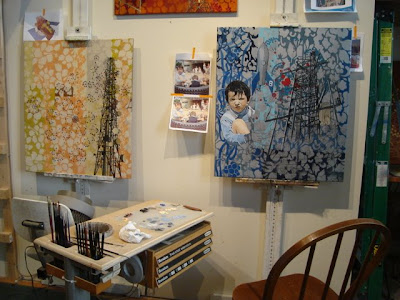 The moon is a picture of a target of excellence. To get there we need lots of folks working together.

I want to go to the moon. And I want my whole country - 1 billion plus - warts, beauty spots and all - to come with me.
Posted by Andi and Sheba Eicher at 19:03