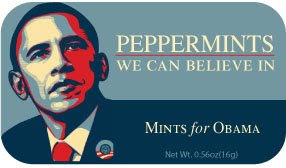 It seems an ice-age ago that I wrote with wonder about the US presidential election process - and that was about the primaries way back in February!

By the time the next cricket match with Australia is over, the United-Statesians will have elected their next president.

The mind boggles at much of the hoopla surrounding these elections (when did they start anyway - sometime back in 2005 I think...). The Obama campaign raising $150 million in a month. Mrs. Palin getting $150,000 worth of clothes from her party. The relentless tracking of voter intent / opinion. The total commodification of the candidates (see mints above) - all the way to the selling of memories in the form of memoirs...

In our dear country of India - where is there a young political leader - who is not the son, daughter, nephew etc. of someone who has already made it into politics? Navin Jindal maybe the only one that comes to mind - but he is hardly a national figure. Hats off to the Americans for giving fresh blood a shot (and old blood too!).

In our dear country of India - where is there any transparency at all about how political parties are funded (forget parties - most of it anyway goes directly to the leaders themselves). I may quibble with Mr. Obamas managers about why they need $150 million in a month - and whether it might be better spent in other ways - but I am amazed to see them being able to indentify where every dollar comes from - and show that the average donation was $86 (still way more than the monthly salary of most of the people I know around here - but that is another story for another day).

In our dear country of India we may cringe at some of the things that the prospective leaders of the United States chose to debate about - but at least they are talking - and people are listening - and debating and writing - the blog output alone should keep Apple / Microsoft and other sundry computer related business in the black for a long time. Where do we have anything similar here?

I don't think that we will have "Advani mints" vs "Peppermints for Manmohan" soon (though for Lalu Prasad Yadav we never know) and thats fine. But how about real responses and debate on the issues at hand? We are facing multiple crises - but our leadership keeps telling us that everything is under control. There is so much that we can do as a nation - if those who have been placed in power would only be accountable. The United-Statesians are hardly perfect - but at least you sense that the process of choosing their leaders is a genuine one.
Posted by Andi and Sheba Eicher at 23:40