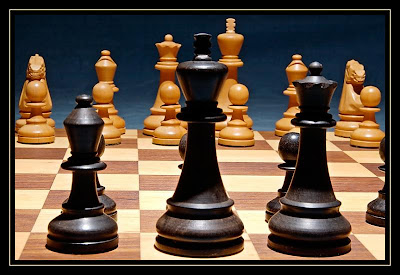 Rolf Gomez taught me the magical game when I was 12. Sitting at a desk in the side room at Nana Chowk we battled away on the 64 squares. Where is Rolf today? He has disappeared from our lives.

Far away in the sleepy once-German-capital of Bonn two men are slugging it out with their minds. Vishwanathan Anand - our reigning world chess champion is playing Vladmir Kramnik for the title. Anand was up 6 games to 3 yesterday - needing only a draw in the last 3 matches to tie up the match. One went by him in yesterday's match - Kramnik managed his first win.

I had to think back to 1995. While studying at Yale and sharing an apartment with Prof. David Lumsdaine and Greg Jackson. Anand had come to New York to challenge Gary Kasparov in the PCA world championship (the only one that mattered then - because GK was so far above anyone in the chess world). The match was played in the Twin Towers of the World Trade Centre. The first 8 games were draws. Then Anand broke through. I remember reading the next days New York Times with awe. The lion had awoken in Kasparov and he mauled his way back to contention - winning 3 more matches and taking the championship away with him.

My house-mate, David Lumsdaine, recreated some of the matches on our chess board - following the minds of the masters.

I have think about those New Haven days while Anand does his thing in Bonn. Go Vishi!
Posted by Andi and Sheba Eicher at 14:32