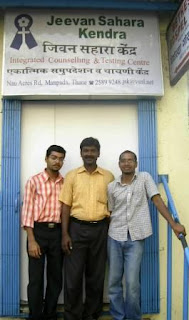 We are privileged to have a new crop of interns at JSK from Union Biblical Seminary in Pune.

This is the fourth year we are hosting the 7 month internship at Jeevan Sahara. Including the present batch, we have now had 9 young men - from 9 different states of our country (Chhatisgarh, Kerala, Maharashtra, Meghalaya, Nagaland, Orissa, Punjab, Tamil Nadu, and Tripura!).

It is a real pleasure to have fresh blood aboard. This year we have (l. to r. in the pic) Leroy Varghese from Kerala, R.P. Silvanus from Tamil Nadu and Akshaydeep Kakade as our own son-of-the-soil from Maharashtra.

The internship programme has been sponsored by Tearfund as part of their effort to get seminarians out on the street, working with the poor. The interns who come to us certainly get plenty of exposure to the cruel situations so many are in. Working along with our staff, they visit homes and minister to families with HIV - while at the same time learning about what hands on work with the poor is all about.

Seven months may seem a long time - but it just seems to dissappear in a flash. We have already finished 2 months of their time with us, and have grown to love these fine young men.

Besides the nitty-gritty of working with people who have HIV, the interns also get valuable lessons in life. During their time they have already had to move from one appartment to another - had a mini-break-in at their room - have had to learn to cook together and manage their finances. As JSK staff, we benefit too from friendly smiles and the camaradery that the lads bring with them - as well as their more formal sharing of the word of God when it is their turn in the staff devotions.

The bottom line: lives are changed. We see three lives who are being groomed for leadership in the church - and know that they will never be the same. We also know that the people they have touched here are transformed too.
Posted by Andi and Sheba Eicher at 16:05